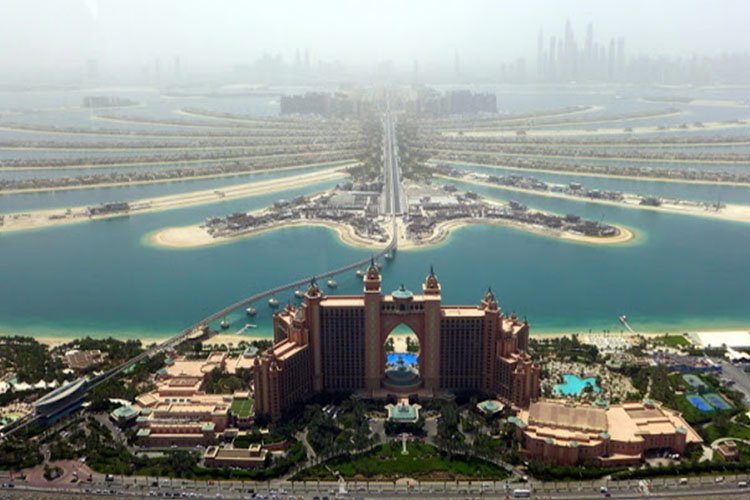 Dubai fuels aspirations of luxuriousness, indulgence and over-the-top grandeur. As much as we might dream though, the lavish lifestyle is usually accessible only to a select few. This has all changed with HeliDubai however, as they make the once unreachable, now attainable with their Heritage and Explorer helicopter tours of the city. For 12 or 22 minutes at least we’re welcomed to partake in the ‘high’ life, see how the grandee lives, and feel the thrill of having the world beneath us.
Operating from the helipad at the Dubai Festival City Mall, featuring a gold souk, brand stores, a marina and signature restaurants, it’s an ideal location to begin an exploration of the city.  Start with an aerial tour gaining a birds-eye orientation and continue back down on solid ground hitting the shops, eateries and sites.
We’re in Dubai during the hottest period of the year and are advised that morning flights are preferable over the sizzling afternoons, so have signed up for a 10am take off with the Explorer tour (DH895, USD $145, 22 minutes). I’m eager for my first helicopter ride, but a tad anxious too as I’m prone to travel sickness. Hubby is as feverish as a six year old, noting ‘helicopter pilot’ as dream job, but also a little nervous as recent aircraft stories blasted disproportionately all over the news are playing double takes in his head.
Learning that HeliDubai, with its strong safety procedures, is the choice of the stars eases our thoughts. The fleet has carried the likes of the Trumps, Bill Gates, Bill Clinton, Mike Bloomberg, Crown Prince of Sweden, Jamie Oliver, Colin Farrell, Michael Schumacher, Tiger Woods, Andre Agassi, Roger Federer, Tony Blair, Tom Cruise and Paris Hilton. The fact that so many high-profile characters have flown with HeliDubai reassures excitable hubby that safety standards are high, and I imagine the ride as a reasonably smooth one as Paris Hilton wouldn’t risk looking a disheveled mess, or would she?
Apprehensions quelled, we turn to the aircraft and discover we’re flying in a Eurocopter AS 350 B3 also known as a Squirrel. Its low vibration levels make it the perfect touring chopper and great for aerial photography. Hearing that it is well suited to high and hot conditions is too a comforting fact, as the heat in Dubai can be sweltering.
Taking off from Festival City, we rise above it all and gasp at the metropolis that seems to rise from the encircling desert and sea. It’s my first helicopter ride. I’m dizzy with excitement but also with motion sickness. Adrenalin kicks in however and my nausea is just background to the rush of the ride.
The pilot narrates the flight in progress so we are able to spot the key sites on our journey. Taking a path down “The Creek” through the historic centre of Dubai we pass the regionally typical dhows, old souks and the Dubai heritage village. Next we change course heading south and marvel at the stunning white sands and aquamarine waters that mark the beaches of Dubai. The iconic Burj Al Arab is our next eyeful of wonder followed by The World and The Palm (an amazing feat of human ingenuity in creating manmade islands in the shape of their namesakes). Our final turn is made at the Atlantis Hotel where we head back down along Sheikh Zayed Rd and return to Festival City.

It’s been 22 minutes of exhilarating nervousness, wonder, pleasure and thrill! We can’t wait for a chance to do it again, and highly recommend the flight as an awe-inspiring kick-off to any visit to this magnificent city.