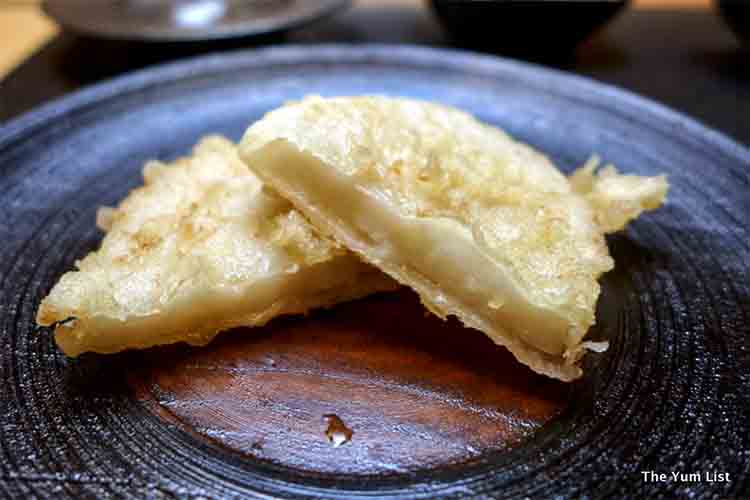 Only available until the 12th of June, is perhaps the most expensive meal I’ve had the fortune of consuming in Malaysia. Prized ingredients, masterful chefs and the prestigious location of The St. Regis Kuala Lumpur set the stage and the justification for the price tag.

The suppliers of Kirin Ichiban, Japan’s number one 100% malt beer, have teamed up with the chefs at Ginza Tenkuni, Malaysia’s first tempura specialist, to compose a Kirin Ichiban inspired tempura omakase menu.

Ginza Tenkuni in Japan has been operating since 1885, and is well reputed for its secret tempura batter recipe, special tempura oil, and its own house-made tentsuyu dipping sauce. Chef Satoshi Uehara heads the kitchen in the newly opened restaurant of The St. Regis Kuala Lumpur, and guests lucky enough to partake in the experience are served directly by his head tempura chef, Mr Ishikawa. All ingredients are imported directly from Japan, as is the handmade crockery, and the 300-year-old Hinoki wood counter.

Kirin Ichiban, available by the bottle at the restaurant, utilizes a ‘first press’ brewing method where only the first pressed malt liquid, the clearest and purest strain, is used to produce a beer that is crisp and rich. Drawing from Japan’s vibrant food and beer culture, the omakase menu combines the invigorating flavours of Kirin Ichiban with the freshest of seasonal ingredients from Japan.

A trio of appetizers begins the meal with Green Soybean Kakiage fried in a beer batter and topped with Chi Ayu (baby sweet fish) the recommended place to start. Abalone (awabi) that has been stewed for 48 hours in Kirin Ichiban follows, and a sweet conclusion to the starter is found in the Yamamomo (omelette) with Bayberry. From savoury to sweet, the beer is a flawless playmate.

I linger longer than usual on the next snapshots, secretly waiting to see if any of my fellow diners choke up and roll off the backs of their chairs after swallowing the infamous sashimi of Fugu (pufferfish). Only highly skilled and specially certified chefs are allowed to prepare this fish as the organs contain lethal amounts of poison. A little slip of the knife and it’s death at first bite! I must be three timed blessed as this is my third tasting of the notorious creature. The first two left me unimpressed with the toughness of the flesh. The chef here, however, has managed to produce a quintet of tender slices, and the garnishes of spring onions, a chilli and daikon radish paste, and a yuzu and soy sauce dressing serve to bring out the flavour. Tuna (chotoro) and Kingfish (hiramasa) are clean and fresh but don’t get the attention they deserve after the ponderings over the meaning of life roused by their predecessor in this course.

It’s not difficult to guess that the next dish turns out to be hubby’s favourite: meat and potatoes, or more elegantly put, Miyazaki Wagyu Beef grilled until just brown on the edges remaining pink in the middle, and sided with a potato salad.  Broccoli salt, plum salt and mustard seed sauce, make fun condiments for experimentation.

As we’re finishing off the beef, we watch as the chef prepares the next course from scratch. Not only is the tempura fried on the spot, but so too is the batter itself prepared a la minute. Prawn, Pike Conger, Japanese Ginger, Pen Shell, Young Corn, Bigfin Reef Squid, Kamo Eggplant, Garfish and lastly Asparagus are served in succession, each with its own unique taste and texture, delicious on their own, but made even better with a sip of beer.

Hailing from the same era, the Edo era, that Ginza Tenkuni was established, is the Inaniwa Udon, our final savoury course. Al dente noodles are topped with the restaurant’s signature Kakiage of shrimp and Japanese parsley. The dipping sauce amplifies the brisk mouthfeel of the beer, and the carb ending ensures our stomachs are happily filled.

Appearing as a mini schooner of beer, a mildly effervescent Kirin Ichiban Jelly is crowned with a head of beer foam. Perfectly ripe Japanese fruits clear the palate and leave us feeling cheerful and content.

The Kirin Ichiban inspired tempura omakase menu at Ginza Tenkuni is priced at RM1200 per person, including two beers and a free flow Japanese tea. It is available for both lunch and dinner until June 12th, 2016. Reservations are a must.

Reasons to visit: a unique experience with masterful chefs and exquisite Japanese tempura.