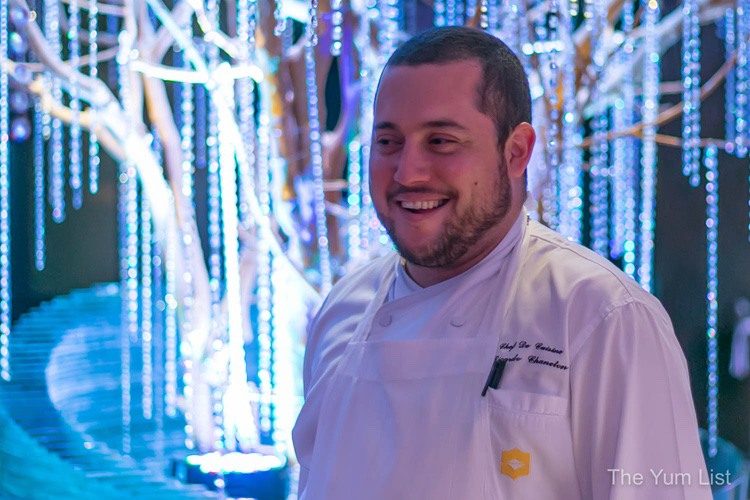 For four days only, guests at Shangri-La Kuala Lumpur’s Lafite restaurant can dine on the cuisine of world-renowned Chef Ricardo Chaneton! Visiting this week from Restaurant Petrus, Island Shangri-La, Hong Kong, chef Ricardo has prepared four menus of his signature French creations enabling diners to get a taste of cuisine from one of Hong Kong’s most talked about restaurants without the airfares to get there.

The wealth of experience that led Chef Ricardo to Restaurant Petrus is quite impressive. Some of the highlights are stints at the Michelin two-starred Mirazur in France; Le Gourmet at the Intercontinental Tamanaco Caracas, Venezuela as well as Michelin-starred Quique Dacosta, Spain. And, yes, you may have guessed that hubby and I are very excited to connect with a Venezuelan, a country that, despite its current struggles, will forever be in our hearts.

Guests can choose from two, three, four or six courses and tonight Rich, hubby and I dine on the four-course menu. While we’re enthusiastic to get tasting, a drink at the lovely foyer bar at Lafite is the perfect prelude to the evening. A young, crisp Chilean sauvignon blanc does the trick making an approachable and easy entrance.

The restaurant is set with white-clothed tables, which are simply adorned with white roses, shiny silverware and reflective wine glasses. A tree centres the scene dangling crystal chains that catch the light illuminating mini rainbows. As guests are seated, chef Ricardo Chaneton makes the rounds greeting diners and welcoming them to the dinner.

The appetizers show strong foundations in French cooking technique with influences of Asia in the ingredients. Green asparagus salad is a vibrant beginning with grapefruit, citrus yoghurt, acacia honey and vanilla. Plump verdant sprigs of the shoots are tender while maintaining the integrity of the veg. The dressings contrast the fresh and lightly earthy undertones of the asparagus with hints of sour and bitter, serving to open the appetite.

Before the poached Nova Scotia lobster arrives, we are treated to a demonstration by the chef. Resembling an enormous silver corkscrew, the traditional machine used to press duck is wound round and round pressing the flesh and expressing the juice of the lobster. The juice and claw are served in a separate bowl offering the full intensity of the crustacean. On the plate, chef Ricardo shows off his skill with firm yet succulent tail flesh accompanied by grilled leeks and a green curry sauce. The lobster has been poached in a chamomile broth bringing a faint floral whisper to the flesh.

Guests have a choice of fish or beef as the main. The boys go with beef and I have the fish.

Amadai, a relatively small marine fish, often the star of Japanese cuisine, is crisped and plated with mini zucchini. Known for its soft flesh, mild sweetness and balance of umami flavours, the fish does particularly well with the lemon thyme sauce. The scales have been fried in a manner to make them stand on end delivering quite a dramatic appearance.

The beef tenderloin pleases the men to no end. Monalisa potato textures and South American-influenced chimichurri sauce enrich the recipe even more-so. The meat is a long rectangular prism charred on the outer edges and pink in the middle. The herby sauce has a distinctive kick, a little stronger than what is tradition, but very well received in this part of the world.

Again, we are presented with a choice in the ending: strawberry or chocolate.

Gariguette strawberry éclair is filled with chopped strawberries and topped with rich Madagascan vanilla cream. I predict hubby’s closed eyes and satisfied murmurs before he even digs in. Fresh strawberries garnish its length making a pretty plate.

The Valrhona Araguani, on the other hand, features 72% Venezuelan chocolate in a trio of preparations. Bitter orange is a perfect mate and cocoa ice cream balances the sharp finish with a smooth, chilled sweetness.

Chef Ricardo Chaneton of Restaurant Petrus has prepared four menus for diners in Lafite Shangri-La Kuala Lumpur. The two-course menu is priced at RM195, the three-course menu will set you back RM245, the four-course menu comes for RM450 or you can completely indulge in a six-course menu for RM 685. All prices are Nett per person. Restaurant Petrus’ chef will be at Lafite from the 19th of March until the 23rd of March 2019. Lunch is served from 12 pm to 2.30 pm and dinner from 7 pm to 10.30 pm.

Reasons to dine with Restaurant Petrus Chef Ricardo Chaneton at Lafite: a chance to taste famed recipes from a world-renowned chef without the travel expenses; we loved the simplicity of the asparagus, the ingenuity of the lobster and the perfectly cooked beef tenderloin with chimichurri.