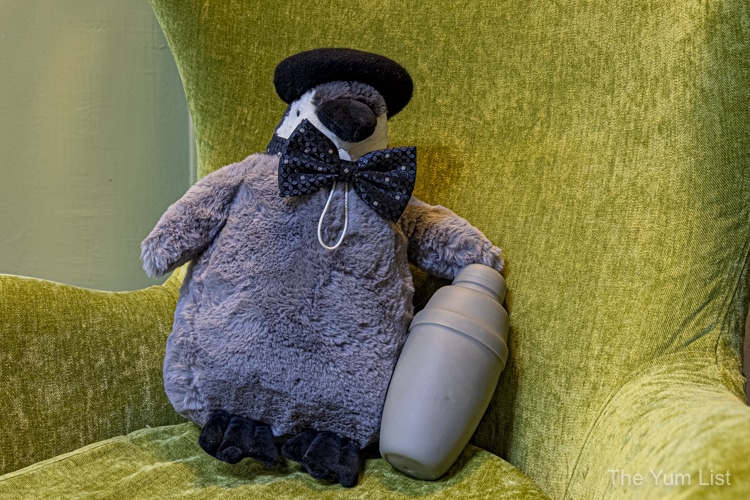 The Rebel Penguin of Funky Town

How did the 80s become such a fascinating decade lately? With mullets making a comeback and Stranger Things dominating Netflix, it seems we cannot help but fall in love with an era that worships synthesised disco tunes, eye-popping neon clothing, and frenetic dance aerobics routines. You know the one.

For a decade that probably didn’t seem so remarkable then, the 80s have certainly dominated our collective minds with their infectious music, dynamic visual aesthetic, and now, their drinks. The word on the street is that there’s a new funky little bar in a nondescript office building that pays homage to the dark and seedy age of 80s cocktail culture. Hidden among the building’s rows and rows of ancient dental clinics and travel agencies is a particularly rebellious penguin lounging atop a chartreuse armchair, beckoning you to walk through a pair of heavy drapes next to it and into The Rebel Penguin of Funky Town.

The Rebel Penguin of Funky Town

A celebration of all things alluring and kitschy of the disco age, the 20-seater bar makes use of its location’s original barbershop furnishings that’ll make you talk about it, talk about it, talk about it, talk about it. And if they don’t, the drinks will definitely keep you groovin’ with some energy. With the well-dressed Alvin Au Yong, who is never seen behind the bar without a chic bowtie and trademark flat cap, personally making your cocktails, you can be certain that every sip will be brimming with innovation. The stellar concoctions are a result of Alvin’s approach to his craft, which he describes as similar to the performing arts: the set is filled with captivating characters that converge around the stars of night that have been buffed and prepared by the sole dramaturge to tantalise the senses.

But enough wordplay. Time to dive headfirst into The Rebel Penguin’s fascinating menu and dissect three of its neatly packaged cocktail categories: Chill, Radical, and Legit.

True to its name, the Piscothèque (RM40) comes served in a disco ball, complete with heart-shaped shades in case too much light reflects off the glitzy surface. Alvin’s interpretation of an Aperol Spritz, the Piscothèque is a refreshing aperitif that jolts the senses with cranberry pisco, lemon balm, and aloe vera wine.

Accompanying the Piscothèque is a dancing light show known as Hey Poppy! (RM40) that lures you with a lingering sweet profile from the longan tea before tickling the back of your throat with turmeric. The added fragrance from the torched orange resting on the glass further distracts you from the fact that the drink’s base is poppy seed tequila, which will probably leave you wondering why you’re smiling so much and your handwriting’s barely legible even though you’re just on your second glass for the night.

Headlining the following rad section is Starway to Heaven (RM40), a fruity mix composed of Cascara brandy, pear, starfruit, osmanthus, lemon, and mint. The pear and starfruit are a winning combination for this bewitching brew, and the osmanthus makes it incredibly easy to down the whole thing in under a minute despite the brandy base, but it’s the dainty lotus chip that singularly stole the show with its beetroot-red hue and profile (try saying this line while you’re drunk).

Once you’ve ascended to heaven, keep an eye out for a unicorn that serves Somewhere over the Rainbow (RM40), which is better thought of as a dessert than a drink. Made with hand-whipped purple yam ice cream engulfing the layers of mango gin, fino sherry, and Indian borage, this sinfully creamy creation is a nostalgic dream for many locals, we imagine, who grew up buying cheap ice cream from that one Indian uncle on a motorbike right outside of school. The flavour is indisputably nostalgic and addictive, leaving you wanting to recollect more of those bygone memories in a wistful stupor.

The final duo in the trio of categories is foregrounded by the hunky Honky Tonk Man (RM40), a suitable tipple for the suited-up individual. Considered the “strongest” of the bunch, the drink oozes testosterone and even comes served with a protein bar. With banana whiskey, spiced rum, and Tonka bean vermouth, this beefy cup packs a punch with its complex palate and potent nose.

Despite the flex, it was the playful Permanent Surprise (RM40) that outshone the stud with its, well, permanent surprise. With bak kwa whiskey, milk oolong tea, and peanut butter foam in its list of ingredients, the doughnut mug delightfully reminded us of breakfast during happy hour. Like the previous Somewhere over the Rainbow, Permanent Surprise took us over the rainbow with a gorgeous creaminess that envelops the whiskey and proved to be the ultimate finish to our time at The Rebel Penguin of Funky Town.

But that’s not all! The drinks weren’t the only showstoppers at The Rebel Penguin, as the maestro behind the bar’s snacks, Sunny, clandestinely slipped in exquisite bar bites between drinks. At the time of the review, these items weren’t on the menu. Still, the jalapeño poppers, sardine croissant, and truffle luncheon meat with brie and foie gras floss in puff pastry (what a mouthful) did wonders to satiate our hunger as we inhaled our drinks.

The croissant and puff pastry deserve particular mention. The former may look like an unconventional choice for a snack until you savour the peach pickles, caramelised onions and smoked cream with the meaty sardine on a fluffy piece of crisp croissant. The entire thing looked like an antithesis, but boy, did it sing in our mouths.

On the other hand, the puff pastry was an incredibly rich intermission that proved to be a perfect complement to the sweeter cocktails we’ve had throughout the evening. Again, the composition might seem a little unusual until you’ve taken a bite out of it, which would then lead to puppy eyes in Sunny’s direction begging for more (or for the recipe).

The office building might not have been your first choice when it comes to drinks, but with The Rebel Penguin of Funky Town firmly establishing its presence there, you should definitely push it up to the top of your list of speakeasies to visit. As we wrapped up our time there, we just had one last question for Alvin…

“Because they’re cute, and the way they dawdle looks as if they’ve had a good night out.”

Reasons to visit The Rebel Penguin of Funky Town: Somewhere over the Rainbow; Permanent Surprise; Intimate and retro setting that satisfies your 80s nostalgia; cool and quirky drinks that come in all shapes, sizes, and lighting configurations to fill up your Instagram feed and tummy.

The Rebel Penguin of Funky Town
Location revealed upon booking.
Reservations via DMs on Instagram @therebelpenguin
OR via WhatsApp @ +6011 2506 3313