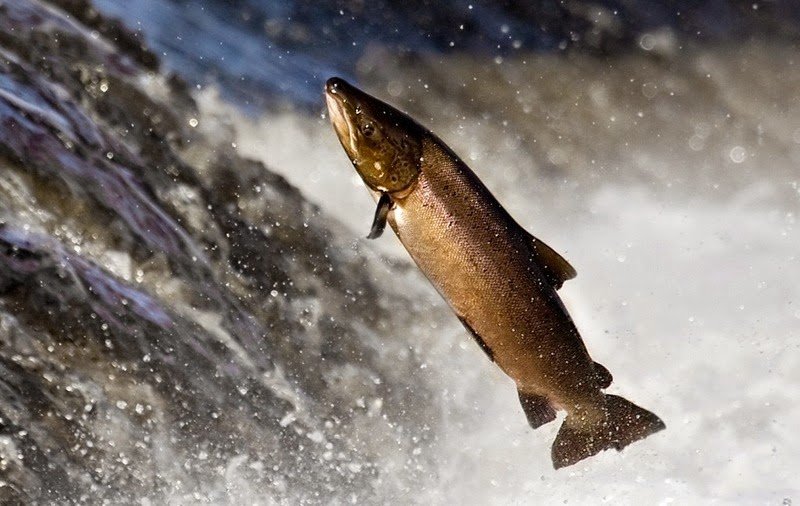 The High Price of a Piece of Salmon

Dr. Gerry Goeden
Last night, I was sitting down to a beautiful fillet of Salmon in my favorite Japanese restaurant. It tasted wonderful and the ambiance was just right. Waitresses in Kimonos scurried around making every meal perfect. But then I spoiled the moment and began to wonder where the fish came from and if my meal was damaging the environment or my health. Why, oh why do I do this?
“People need to think twice about what they eat. I’m going to write about this,” I announced.
My partner Jessie groaned, “It’s the fish again, right?”
She was right; about 50 percent of the fish we eat are farmed. There is good reason for this as, one by one, the world’s commercial fisheries collapse through over-fishing.
When things started to go wrong with world fisheries, fish farming was hailed as the ultimate solution. Fish could be produced cheaply and those in the ocean would be under far less threat.
“So what about my pan seared Salmon with a light crusting of salt?” I wondered.
Salmon are an incredibly predictable species. Eggs are laid at high altitude in clear freshwater mountain streams. After a stay of up to three years their body chemistry changes and they move out to the sea to mature. Most are caught when they return to the same river they hatched in. They find the right river by following their noses and using an amazing olfactory memory.
Early Salmon farmers (ranchers) didn’t even have to fish for them. When the Salmon returned to spawn after 1-5 years at sea, they literally swam back into the factory that produced them only to become tomorrow’s fresh fish.
Beginning in 1971, aquaculture scientists started scouting to find the ultimate genetic combination for farming. These “designer” fish, selected for their ability to grow rapidly and use food efficiently, formed the breeding lines of the Salmon that would, 10 generations later in 2007, support a US$10 billion industry.
Salmon farming had become a machine for printing money and the future seemed to be bright. But was it?
Hatcheries were producing well over 170 million “designer” Salmon. But not all followed the rules and returned to ‘base’ to breed. In fact more than a half million Salmon escape their destiny with the processing machines each year and breed with wild Salmon. Wild stocks weren’t wild anymore.
These days only about 10 percent of Chinook Salmon spawning in one of California’s Salmon rivers are wild stock and it’s pretty much the same everywhere. The numerous varieties of wild fish are being ‘over-run’ by hungrier and faster growing hatchery fish and heading for extinction.
XXX But the “designer” fish depend on us to make up for their weaknesses and inability to maintain their own abundance. We do this by further increasing production of even weaker, more ‘inbred’ fish and pushing wild stocks to the brink of extinction.
This is fine for making money but the day we close down a hatchery the Salmon in that river will be lost forever. They aren’t natural; like chickens, we have “designed” them and they can no longer exist without our continuing involvement.
So what do we need to know?
• Most of the Salmon sold in supermarkets and restaurants is farmed and most of this is Atlantic Salmon. The biggest producers are Chile and Canada. The bright ‘pink’ color is derived from chemical additives trying to mimic wild coloration that comes from a natural diet.
• Wild Atlantic Salmon is endangered and is not landed commercially no matter what you are told.
• Salmon farming is associated with many environmental concerns and some important food quality concerns including pollution, antibiotics, and chemical residues. There are guidelines for how often you should eat it.
• If you are very concerned about heavy metals and pesticides select only farmed Salmon from remote and well regulated places like Tasmania and Canada. If you are pregnant you might consider a different meal.
• There are no Salmon farms in Alaska so all their fish are wild caught. If you are offered wild caught fish in winter they were either frozen or are not what is claimed.
• The best bet in terms of minimal impact on the environment and food quality is wild Salmon from Alaska; Chinook, Chum, Coho, Pink, and Sockeye are all great.
• A second choice worth considering is Arctic Char, a close relative of Salmon, produced by eco-friendly farms.
And what about my pan seared Salmon?
I enjoy Japanese cuisine often enough to have become great friends with the chef (he’s become used to me) and when I asked him he said, “I usually buy Tasmanian Salmon; Alaskan if I can get it. But Tasmanian is good quality and always available. How’s yours tonight?”
“Perfect!” I replied.
Jessie groaned again.
Read another Dr. Gerry article here.