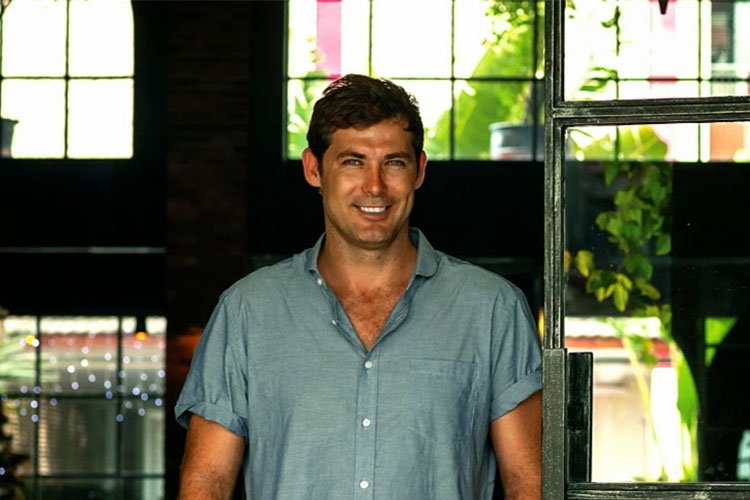 What do you do and how did you get into the industry?
I first got into the industry when I was in year 12. I always felt comfortable in the kitchen but never thought that would be my calling. In 1996 my mates got me a job in a hotel scrubbing dishes so we could spend the rest of the time bombing hills on our skateboards and surfing the most amazing surf breaks on the Gold Coast. Then by surprise I actually fell in love with cooking, and within a few months started an apprenticeship. The realization soon hit me, that with this trade and my European passport I could possibly travel the world. Which I eventually did for seven years.


What’s the best/ worst part of your job?
The best part of my job is having a customer come up to me and explain that they have just had one of the best, if not the best dining experiences of their lives and that our staff were a large part of this. Then seeing the staff react to these comments knowing that they have done their job.
I’d say, more the toughest part of my job than worst would be the hours. After a whole morning of mental challenging issues, then to back it up in the evening, making sure to be on your best game, that’s tough.


What’s your personal favourite meal/ drink at Barbacoa?
I love our cocktails as much as the food. We have amazing margaritas, martini’s, mojitos and some really special Tequilas.


Tell us a story about one of the dishes/cocktails you prepare.
Barbacoa’s Octopus dish has the basic fundamentals of a very famous Spanish dish called ‘Pulpo a la Gallega’ which I ate regularly when I lived and worked as a chef in Mallorca. The dish is simply boiled potato sliced into discs covering the base of a Catalan dish, with boiled octopus pieces on top. The dish is then sprinkled with salt, the best pimento and fantastic Spanish oil. I recreated this dish as a barbecue dish, using crispy polenta instead of boiled potato, BBQ Octopus in Pimento marinade with a refreshing watercress, chive and green olive salsa. It has become one of the most favoured dishes on the menu. Most of our dishes come from inspiration of travels but with a modern twist.


What’s one of the craziest things you’ve seen behind the scenes?
I can take you back to one of my earlier experiences when I was still an apprentice. I’d have to say it’s probably one of the most cringing things I’ve seen in a kitchen, but just!
I had never heard of an agency chef before this young chef just out of his apprenticeship, came to do a stint as a breakfast cook. He walks in with the biggest grin, which took me by surprise as I was constantly surrounded by old grumpy chefs!!! He had a real carefree attitude, not a care in the world. He excitedly explained to me that his weekly wage is more than my executive chefs and that he had this rare freedom that a full time chef could only dream of.
He then proceeded to open up his brand new alloy looking shining knife box, which was a rare commodity that most chefs couldn’t afford. He had the largest range of knives and tools that I’d ever seen, which I was soon to come to the realisation, that he probably never knew how to use any of them!! Anyhow he takes out three knives and says, have you ever seen a chef juggle three knives? These knives ranged from 45cm – 30cm to 20cm blades. I give him credit, he successfully did a couple of motions before one blade came down and cleanly sliced the top off one of his fingers. He bandaged his hand and just disappeared not even reporting the incident as he new he was to blame.


The perfect day off would be…
The most important thing is to make sure you have your family with you and then if there’s room, a couple of your beasties, you then proceed to jump in the car and head straight to one of Bali’s many amazing beach clubs and retire for the next few hours leaving the pressures of the restaurant back in Petitenget!


What’s something you’d like guests to know about Barbacoa?
I guess, the little known fact about Barbacoa is that we designed, built and project managed this beautiful restaurant ourselves, while using sustainable local materials and producing a menu that is 90%+ gluten free.


What’s your view on the Bali restaurant/ bar scene?
In my opinion there is nowhere in any commercial beach holiday destination in the world at the moment that offers as many good restaurants, beaches and shopping as Bali. And… every year the competition gets stronger. This is one of the reasons why we decided to set up here.


What can guests look forward to in the upcoming months?
Barbacoa is now open for lunch and we also have a new private dining space upstairs which sports its own bar and kitchen. It can host up to 60 people for a sit down meal or 100 stand up canapé style. It can also be themed according to the customers requests.
Check out our experience at and recommendations for Barbacoa via this link.