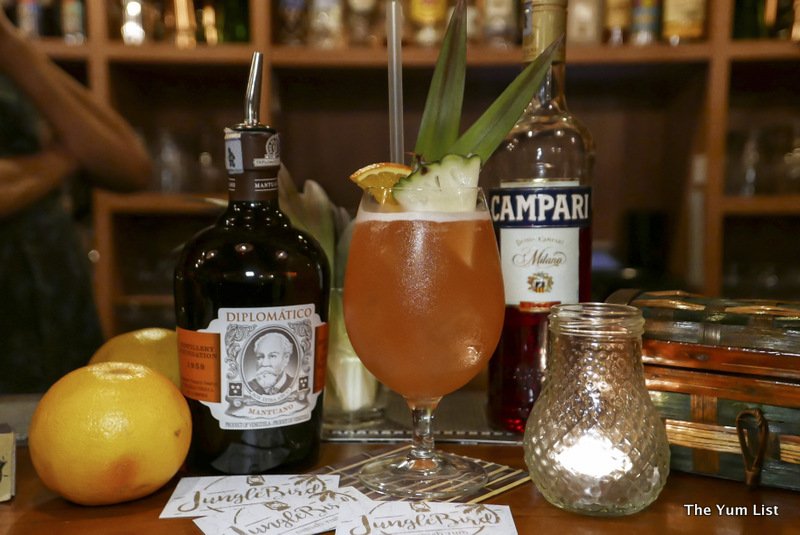 The last place I expected to have an educational experience was in a bar.

And yet, I learned more about rum in an hour with the owners of the Jungle Bird Rum Bar than I have learned in some classes. It could have something to do with the appeal of the subject matter, though…

The Jungle Bird Rum Bar is new on the KL bar scene, having just opened in March. And the owners include two of the most knowledgeable bartenders I have ever met. They have also thought through every little detail of bar ownership, from the décor (leafy jungle themed walls with bamboo along the bottoms and cozy sofas with green and leaf-printed pillows) to the number of people they want in the bar at one time (none of the crowds standing in every available space that you find in many bars on a Saturday night). And each owner and staff member has contributed a drink to the menu from places they used to work, so the final choices are a carefully chosen collection of favorites.

Divy, one of the owners who came over from England just to open this bar, was our host for the evening. His expertise on all things alcohol-related was impressive, but his knowledge of rum, in particular, went beyond anything I could have imagined. With a collection of 96 different kinds of rum from over 20 countries, Divy knew the properties of each one of them. And he took the time to walk us through a few, allowing us to sip a few straight up and then mixing a few cocktails so that we could experience how well the different rums mixed with each other and with the other ingredients in the cocktails. Some of the rums were dry, others sweeter. Some had a higher alcohol content than others. Some were rum agricole and others were rum industrial. All of them were delicious.

Divy started us out with the UB40 (RM 40). This was a blend of rums with reduced wine, pomegranate vinegar and brown sugar. Fun fact – rum is one of the few alcohols versatile enough to be mixed successfully with other rums. The mix creates several layers of flavors and sensations on the tongue. This complexity was enhanced by the hint of vinegar, the sweetness of the brown sugar in the reduced wine, and the tannins that crept through at the end. It was a perfect start to our rum-tasting experience.

After the UB40, we tried the Jungle Bird Grog (RM 55). This was a much simpler drink, with the flavor of the mix of rums prevailing, just rounded out by a slight flavor of cloves and lime. This would probably be a rum lover’s choice since it does let the flavors of the rum speak for themselves.

And of course, we had to try the cocktail, which gave its name to the bar. The Jungle Bird (RM 40) is a mix of lime juice, fresh squeezed pineapple, Campari, and Diplomatico Mantuano rum from Venezuela. It’s garnished with pineapple leaves and a slice of orange and pineapple, which might lead you to expect it to be sweet – but it was surprisingly dry thanks to the bitterness of the Campari and the dryness of this particular rum. The sweetness of the pineapple juice is the first flavor to hit the palate, but the Campari is the flavor that lingers in your mouth after each sip. This is a drink that has evolved over the years since it first appeared in Malaysia in around 1974 and then went on to be known as the country’s national cocktail.

We tried the Hello Rum flight, which included Brugal Extra Dry Rum from the Dominican Republic, Appleton Estate Rare Blend 12 from Jamaica, Ron Zacapa from Guatemala, and Rhum JM VSOP from Martinique. The tasting really allowed us to gain an appreciation for the differences from one style of rum to the next. Divy says that they hope to expand the tasting experience eventually for their customers with rum tasting evenings, which would definitely be a worthwhile experience.

Despite the owners’ love for rum, they recognize that it may not be everyone’s drink of choice, so they do have other options on the menu. They have beer, wine, sparkling wine, champagne, and other alcohols (vodka, gin, tequila, cognac, and whisky). But I would highly recommend taking advantage of the expertise of the friendly hosts in this bar and trying one of their specialities.

A Bite To Eat

If you want to snack with your drinks, Jungle Bird provides some novel options. Since they themselves don’t have a kitchen, they can order food from Neroteca, the Italian restaurant downstairs from them, or they will allow customers to bring in food from the outside. Divy felt strongly that in a country that appreciates its food so much, it would not be fair to tell people they couldn’t have food with their drinks just because the bar doesn’t have a kitchen. What they do have, though, is a lovely spiced nut mix with dried anchovies, peanuts, garlic and chili peppers. The mix accompanied the rum very nicely.

This bar is a friendly, welcoming place, and it is honestly a fascinating taste experience, especially if you can get a seat at the bar and get the explanations that we were lucky enough to have. Just don’t forget to reserve on a Friday or Saturday night as it is already very popular – and it’s easy to see why.

Reasons to visit: an extensive collection of rum accompanied by knowledgeable and friendly bar staff; don’t miss trying Malaysia’s classic cocktail and the bar’s namesake the Jungle Bar, and for those serious about their booze a rum tasting flight is highly recommended.