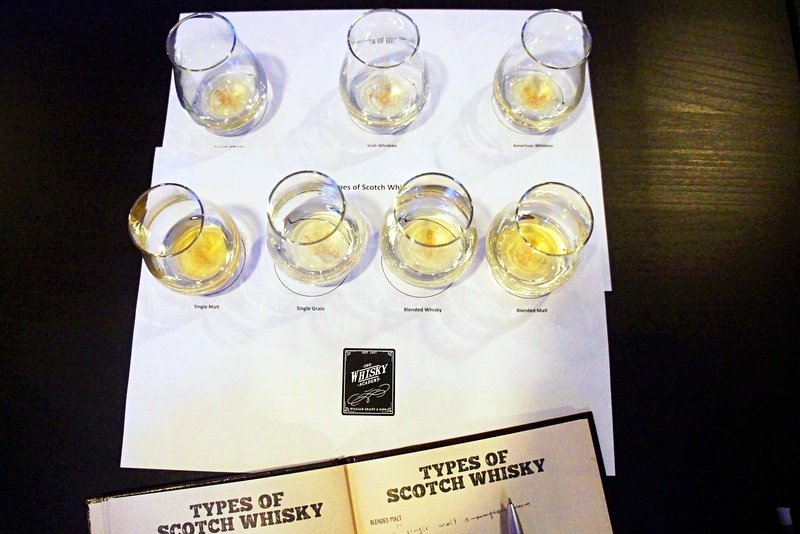 The Whisky Academy held its Malaysian debut in late April in the Kuala Lumpur suburb of Petaling Jaya (*they have since shifted office and are now based in Plaza Damas, Sri Hartamas). The event was an all-day training course which had as its goal to certify with the lofty title of Whisky Apprentice.

Among my fellow seminar attendees were two gentlemen who had journeyed from Penang to supplement their already prodigious knowledge of whisky.  One of them would later confess, after several rounds of sampling from a tulip-shaped snifter, that he owned more than a thousand bottles, most Japanese, and bought far more than he could drink. His Penang compatriot admitted to being a collector in his own right and his Penang companion’s procurer. The young lady to my right, Joyce, from the Sarawak region of Malaysia, confided that drinking whisky was a family tradition and a personal hobby. I was clearly out of my league.

I must confess that, before the seminar, I disliked whisky and all its variants. My parents sipped from distasteful caramel concoctions called Manhattans and Rob Roys. While I am not a teetotaler, my taste in drink tends to craft beers and a glass or three of wine. If I tipple the harder stuff in tropical climes, it is usually clear spirits like rum or tequila as the fuel of Margaritas, Daiquiris, or Pina Coladas. In short, I liked lady drinks.

While I could get away with lady drinks in Thailand, where boys sometimes turn out to be ladies and vice versa, there was no such luck in Malaysia. I had signed up to sample the top-shelf hard stuff and, while I got a free pass and the journalist ringer, my seminar would-be apprentices had paid handsomely – I understood that tuition was in the high-hundred RM – simply for the privilege of supplementing their whisky knowledge and for the distinction of advancing in the Whisky Academy ranks.

It may seem incongruous to be learning about whisky in Kuala Lumpur, but the Malaysian capital clearly comes to recognize the value of catering to the tastes of visiting businesspeople and tourists and makes allowances for cultural diversity, especially in the low-profile RAD PAD townhouse.

Our mentor and guide was none other than Shawn Chong, winner of the Diageo World Class competition as the best bartender in Southeast Asia after three times winning the crown for best in Malaysia. With deep whisky wisdom seemingly incompatible with his youthful bookish looks, he took upon himself the task of schooling us wannabe-apprentices – with wry humour — in the art and science of whisky making, and (more practically) tasting. The course was started by Matthew Fergusson-Stewart, Glenfiddich’s Brand Ambassador for Southeast Asia, as part of a worldwide program sponsored by William Grant & Sons, owner this renowned Scottish distiller and other Scotch whisky brands. However, the organizers stressed that this was not a promotional event but rather a brand-neutral educational event to expose attendees to whisky in all its diversity.

The seminar was generous in providing a round after round of sampling mats of various types of whisky variations, for which attendees were trained how to swirl and inspect color and consistency visually (against a white background, please) for ‘ legs’ and ‘tears’ then ‘nose’ (in tulip-shaped snifters to focus the bouquet of scents), then sip, then swallow for the full tasting experience.

While my more experienced colleagues exclaimed about their olfactory perceptions (“a hint of cinnamon and stewed apple”, “strong vanilla with some peppermint accents,” “definitely orange marmalade!”), I was content to sniff and sip and swirl and chew and swallow with a more generic  conclusion along the lines of “hmmmm, wow, that’s really good” which got even more enthusiastic, generic, and monosyllabic  (“hmmmmm”, “wowww!”, “really!!!”, “goooooood!”) as my learning and tasting day progressed (or digressed, as the case may be).

But I digress. Indeed, one of the early points Shawn raised was in the distinction between Whisky and Whiskey. Turns out that the reason is national origin. While the Irish and the Americans use the ‘e’, the Scottish, Japanese, and other producers do not.  I was also surprised to learn that Ireland has pretty much ceased whiskey with an e production, whereas Scotland has ramped up to the extent that whisky accounts for a huge two-digit chunk of the UK’s food and beverage exports. If Brexit goes through, whisky drinkers on the Continent will not be happy campers.

One thing that comes through in our hour-long lesson on the centuries-long history of whisky is how taxation and prohibition have always played a role in the growth or decline of whisky distillation. More tax, less drinking, or sometimes, driving the industry underground added to its mystique as a forbidden fruit or, in this case, forbidden mash of grains.  Battles like the US Whiskey Rebellion of 1791 were fought over taxes on the distilleries and therefore the drinkers. Kings and governments would hoard it or ban it and always regulate it strictly. So much so that the tax man often became a partner of the distiller. In 1826, distiller Robert Stein invented the first continuous still, but it was later refined and patented by taxman Aeneas Coffey as the Coffey Still in 1831,  a crude usurpation of invention that validated, Shawn quipped, the crude mispronunciation of Mr. Coffey’s first name. Apparently, this is an inside scatological joke among chuckling whisky history buffs!

But most of the history and production lesson was, pardon the expression, more refined. We learned the distinctions between the legal requirements of various governments for their domestic spirits. We learned to distinguish single malts from single grains, and one blend from the other. We learned to discern the distinctive nose and taste of the four (or was it five? That was toward the end of the course) Scottish regions.  We learned that even angels take their 2-3% share of whisky when it evaporates.

It was a long day of learning and nosing and tasting, interrupted briefly by a rather spartan Styrofoam encased box lunch of rice and chicken. The whisky selection was of a consistently higher quality. In all, we must have sampled at least 10 or 12 (or was it 15?) different samples, each of was – how shall I put it? – good, or really, or wow.

Toward the end, Shawn loosened up a little and let the seminar participants act out some role play, in which the now-knowledgeable whisky expert as bartender had to guide the customer to an appropriate selection while trying always to upsell, within reason and perceived budget, to the older, more expensive varieties. A good time was had by all as the slightly inebriated seminarians rose to the occasion and ‘upsold’ customer Shawn some 24-year-old blended malt.

In all, the first-time-presented seminar (he quipped that we were ‘guinea pigs’, not a fortuitous phrase in Muslim culture) was carried by Shawn’s genuine expertise and love for his favorite subject. He was not given more than some perfunctory black-on-white text slides and diagrammatic whisky process animation which didn’t really work. One would think Glenfiddich and its Brand Ambassador could do better. But Shawn compensated for the lack of audio-visual support by delivering insight into the sensory experience of nosing and tasting as well as understanding the essentials of whisky history, production, marketing, and real-world storing and serving.

It was a comprehensive survey of the subject but the big test was coming, with a half hour to complete multiple choice questions (this after 10, 12 or was it 15 snifters of whisky) and the more-important blind taste test. Remarkably, we all passed, although I think I came in last place. But I did take pride in being able to distinguish successfully American, Irish, and Scotch whiskies, no small feat!  Each seminar participant was awarded the coveted Apprentice certificate, a Whisky Academy pin and, not to be neglected, a small bottle (or three) of Glenfiddich, with the test high scorer taking home more, and older, varieties.  We all then retired to the upstairs, where Shawn showed off his bartending skills, this time in more familiar surroundings, behind well-appointed, well-stocked bar.

Shawn gave us all a treat when he served as his grand finale “a whisky older than you are.” Now wiser as a newly minted Apprentice, I took that as a high compliment.

The Whisky Academy Conclusion: The course delivers the goods promised, thanks to Shawn Chong’s command of the subject and winning demeanour. Audiovisual materials should be better, and the box lunch was meager. But the served spirits and passion of the presenter more than compensated for the less satisfying wrappings. All seminar participants appeared pleased with the outcome, and the value of their Apprentice level certification, albeit perhaps a bit looser and blurrier than when they arrived.