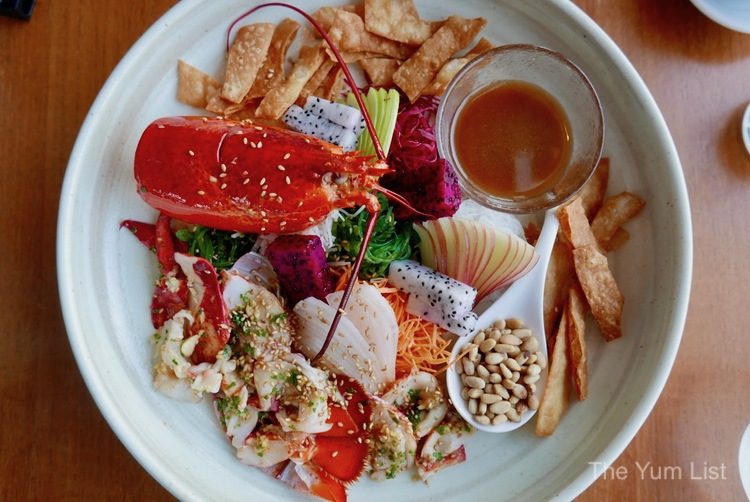 Yee Sang: the higher the toss, the greater the prosperity right? Well, you can’t get much higher than pitching this essential Malaysian Chinese New Year dish 56 stories above the ground. So officially, if you want to ensure the most bountiful Year of the Pig, Nobu Kuala Lumpur is the place to do it. And, while you’re at it, why not plan a night in the clouds to woo your Valentine as well?

Hubby and I recently had a sneak preview of both the CNY 2019 and Valentine’s menus at Nobu Kuala Lumpur. One not so far from the other, we capture the highlights of each below.

It’s not just the food we get to sampling but some cocktails also and the special for February is the Kaffir Lycheese (RM70). Butter and cheese are steeped together with cachaça and then combined with lychee puree, kaffir lime and a dash of blue Curacao. It’s not heavy or buttery as you might imagine as the fruit and citrus do well to balance it out. Lychee puree gives creaminess and the drink is nicely rounded. When I quiz the bartender about the why and how of butter and cheese, he smiles and replies, “Just like the chef, the bartenders have crazy minds too.” Please note the use of bamboo straws only if necessary; most drinks are served straw-free. Thumbs up for #taknakplastik !

The sunset is brilliant tonight so we think another cocktail would be auspicious. Catching the tail-end of January’s creation, the Ruby or Ochatini (RM55), sees Tanqueray gin infused with ocha (Japanese green tea) and chamomile along with a homemade red wine syrup (wine, cinnamon, apple and sugar). Together with Martini Rosso, it’s shaken and poured over ice. While the first cocktail is perfectly suited to hubby’s fruity personality, I’m rather fond of vermouth and enjoy the commonalities the drink draws with one of my go-to bevvies, the Negroni.

Kicking off the festive feasting, Harharhar (RM288++) might sound like an onomatopoeia for laughter in English but in Chinese, it can represent two things: lobster or prawns and happiness. And so it is with the lobster platter of happiness we take a look at Nobu KL’s most popular Chinese New Year dish (they’ve been preparing the platter for the past three years to an encouraging response). A beautiful plate of finely sliced jicama, tsuma (garnish), beets, carrots, Asian pear, green apple, rose apple, dragon fruit, crispy wonton shells, seaweed salad, pine nuts, sesame seeds and a wafu dressing of honey and sour plum are luxuriously complemented with a whole lobster. It certainly makes for an impressive beginning.

Another dish from the CNY 2019 Nobu KL menu is the steamed Sole Fish with Iwashi Dashi (RM158++). It is superbly wet with a sauce of goji berries and edamame and topped with chilli threads, black moss and crispy iwashi (small fish from the sardine family).

Switching to the Valentine’s menu, the grilled Fresh Water Prawn is not only presented beautifully but is absolutely delicious. The prawn has the flavours of the grill complemented by butterfly pea flower gel, coral crumble, prawn oil and micro greens. Malaysia’s magic ingredient, bunga telang, works its witchcraft in creating a spellbinding deep blue garnish. It surely should work its wizardry in brewing some Valentine’s romance.

Continuing with the menu of love, Grilled Wagyu Beef and Bottarga is so buttery and gently sweet that is could “almost” be dessert. The meat is soft and rosy in the core with a lovely char around the edges. The side of corn cream, dry miso popcorn and roasted Romanesco balances the texture and enhances the buttered popcorn flavour.

The traditional tummy filler of rice before dessert is made more luxurious with Truffle Rice on the Valentine’s menu. It’s both rich and fresh in one spoonful as the spinach chazuke balances the intensity of the truffle. Instead of the traditional green tea used in chazuke, spinach takes its place perhaps with the intention of fortifying the diner’s strength much like Pop-Eye.

The Chinese New Year 2019 menu concludes with the “God of Wealth” (RM48). It’s a cute ladybug looking sweet, round and red with layer upon layer of complexity. Inside there’s a white chocolate mousse embracing a pineapple yuzu compote. The fruit is thick and textured and reminds me of pineapple tarts. Surrounding the sphere are dots of pineapple yuzu curd and white chocolate coins promising wealth and deliciousness in the new year.

Ending with love, the Strawberry Pavlova is the most creative version of this Aussie classic I’ve seen. The bottom is a meringue cup filled with strawberries. It’s sealed with a layer of white chocolate and the top is a ball of strawberry jelly covered with a swirl of vanilla cream. It’s sweet and tart and creamy. They’ve even picked microgreens in the shape of love hearts to sprinkle around the edges. Sweet!

Manager Gopi wickedly suggests the that maybe we’d “like to continue the romance with a dessert martini?” You know the answer. Yes! Nobu Style Espresso Martini (RM65) and Tiramisu Martini (RM55), in my books, could easily be dessert in themselves. The former is made of espresso, simple syrup, vodka and Padron XO tequila and the latter consists of Baileys, Absolut Vanilla, Frangelico, an espresso shot and coconut cream with a topping of shaved chocolate. The Nobu Martini is popular around the world and the tiramisu version is a big hit in Dubai. They’re dessert and digestive rolled into one with the seesaw of bittersweet in both.

Take a look at the regular menu and other specials at Nobu Kuala Lumpur here.