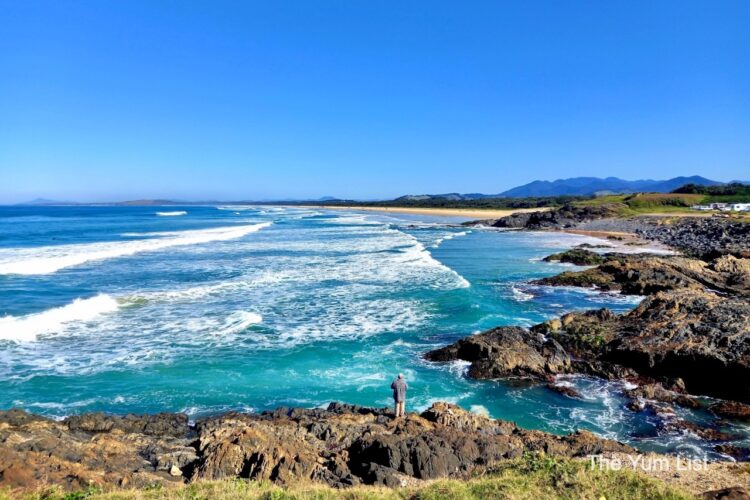 If you’re a regular reader, you’ll know this is my first time back home to Australia for two and a half years. Besides family, one of the things I miss most while living overseas is easy and endless access to pristine nature. Australia is designed for walking and just about anywhere you travel, you’ll find well-kept trails of diverse lengths. Here are five of my favourite short scenic walks on the Coffs Coast, the place my mum currently calls home.

To start the Mutton Bird Island walk you can park at the marina. Walk along the water’s edge with the boats on the right and Park Beach behind you on the left. There’s a pathway for the entire walk with an incline and several lookouts on the way. This is a popular spot for dolphin and whale watching (May to November), and the island is an important nesting site for the Wedge-tailed Shearwater (or Mutton Birds).

To extend the Mutton Bird walk, return to the marina and walk parallel to Jetty Beach. You can stop here and stroll along The Jetty (adding 1.5 km to the walk) and then continue either along the beach or the adjoining parkland to the Southern Break Wall. Be sure to stop at the carpark at the top and take in views of beautiful Gallows Beach on the way.

For this walk, I park at the Harry Bailey Memorial Library in Coffs Harbour and head to the park, across a small creek, past the cemetery and the Botanic Gardens carpark. You can continue walking through the bush trail all the way to Shearwater Restaurant. Although Google Maps looks as though there is no footpath, stick to the path with the river on your left and you can’t go wrong. On the other side of The Promenade where Shearwater Restaurant is, you do need to walk a little way on the footpath of Mildura Street before turning left down Hood Street. Here you’ll find the entrance to the mangrove boardwalk which winds along the creek and comes out to parkland bordered by Orlando Street. Most often I turn around and return the same way I came but there is an option to do the entire loop by following the path all the way around. That is about a 10 km circuit.

About a 30-minute drive from Coffs Harbour, the Urunga Boardwalk offers pretty views of the river, sea and Great Dividing Range. I park at the Reflections Caravan Park and walk out towards the sea. From the viewpoint at the end, you can capture spectacular shots of the river meeting the sea, and looking back you see the layers of the water, land and the rolling mountains. It’s very pretty.

The Urunga Wetlands Boardwalk is a three-minute drive from the Urunga Boardwalk. It’s a short (600 m) but charming circuit through an inspiring wetland habitat converted from a former toxic wasteland. Only the entrance is shown on Google Maps but the path is very clear and loops back around to where it starts.

Woolgoolga Beach is a pretty walk in itself but taking the high road to the right of the shore will bring beautiful rewards. Again, Google Maps doesn’t provide an accurate representation of the walking trail but stick to the coast and you’ll find a paved track all the way to the headland. Be ready for some close-up encounters with kangaroos along the way!

It takes about an hour to reach Dorrigo National Park from Coffs Harbour by car. Here you’ll find several walks but one of my favourite short scenic walks is from the Skywalk Lookout to Crystal Shower Falls. The return journey is about an hour on a mostly shaded path. It is moderately steep in parts and rewards finishers with lovely views of the falls at the end as well as an abundance of bird life in the ancient trees.

If you’re already in the area it would be a shame to miss Dangar Falls, which is less than a 10-minute drive from the Dorrigo Skywalk. The walking path is not shown on Google Maps but there’s a carpark and recreation area at the top of the falls. You can take in the views from the top and also walk down to the base and take a dip. It’s a mix of wooden stairs and bush track and about 20-minutes round trip.

So, there you have it – my fave favourite short scenic walks around the Coffs Coast with some options for add-ons to boot!

Find more exciting things to do in NSW here and stay up-to-date on our gourmet travel adventures here and here. You can also consider Tastes of the Hunter Wine Tours for some additional activities.