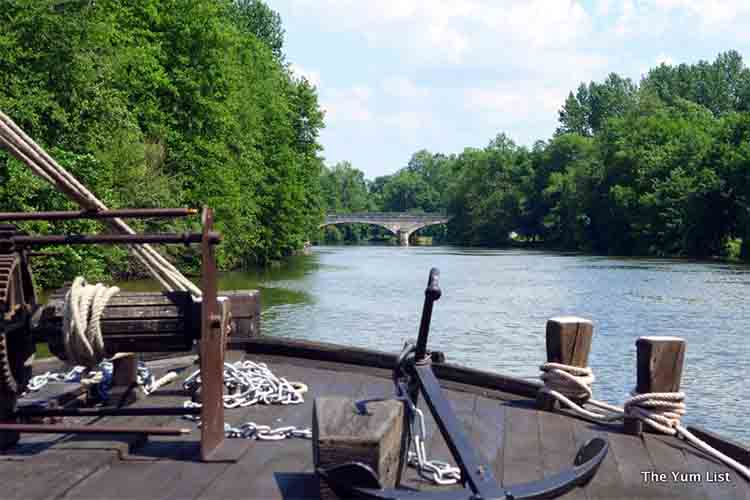 There are few more pleasant ways to while away an afternoon than to spend a few hours on a boat. Whether sea, lake or river, time on the water is one of my favourite pastimes. Learning more about words and history is another so I’m charmed with the connection between the word demijohn, a traditional container used for the preservation and transport of alcohol or food, and the name of our boat today, the  ‘Dame-Jeanne.’ In the past, the gabarres or flat barges plied the river, carrying valuable products from one town to another, drawn by oxen, horses or men and women. Today we chug along by engine, for although there is a giant sail, this is only released on the lower reaches of the river where the Charente joins the sea.

Cognac is now famous for the golden liquor, which takes its name from the town, and the river plays an important role in the development of that product. However, Cognac’s economy was originally built on salt. From the 11th century onwards the town was a thriving port in the salt trade, and thereafter through the 17th and 18th Centuries exported the wine of the region to other European ports. It was only through the 19th and 20th Centuries that Cognac became the key export, and now most people in the town are employed in one way or another in the production of the town’s signature produce.

The Charente River is 361km long and rises from Cheronac in the Haute Vienne, flowing down into the Atlantic, south of Rochefort. Here in Cognac, the humidity and mild temperature created by the river are credited with being a good part of the ideal conditions for ageing cognac.

The sleepy river sweeps us forward and our eyes are soothed by the drooping fronds of willow, and the tall trunks of ash, and common alder which line the slowly winding banks. The short afternoon float takes us past several iconic and historic buildings, not least of which the grand House of Hennessy, which I still have memories of visiting, many years ago with my mother in 1994! Like many of the businesses of the area, Hennessy was not founded by a French, but an Irish family.

The Saint Jacques Tower is another local architectural treasure; in the 12th century two square towers were built to defend the bridge over the Charente, one at each end. Demolished in the 15th century they were replaced by the round towers seen today which form one of three gateways into the town.

We also pass and enjoy the grandeur of several other imposing chateaux on the river:

• The Chateau de Bagnolet built in 1810 by a family of merchants, the Augiers, in a colonial-style influenced by their trade with the USA and Canada. The Augier family is respected in Cognac for being the first family to begin trade in eau-de-vie.

• The Chateau de Begumpet bought by Auguste Hennessy in 1842 and used now for hospitality for the Hennessy group.

• The Chateau de Chatenay, one of the oldest in the region, built in 154, formerly a farm belonging to Duke Charles son of Francois 1 of France

We also catch a glimpse of the charming hotel we are staying at, the L’Yeuse, perched high above the trees with its resplendent views across the countryside.

Apart from history and architecture, nature lovers will enjoy the diversity of wildlife to be seen along the river. From dragonflies and damselflies through moorhens, kingfishers and herons, to the coypu otters of the region, the river and its banks team with life. We saw a swan with several cygnets floating by in a queenly manner.

For visitors interested in learning just a little more, L’Espace Decoverte en pays du Cognac, just opposite the dock, has an original 10-minute presentation to explain the role of the river and the gabarres in the economic development of the region. For us, it was enough just to relax and enjoy the countryside in the midst of a busy visit. Once again we are grateful to Gontran Bosteaux from H. Mounier and Hardy Cognac for hosting us and arranging such delightful experiences.

Reason to experience La Gabarre Dame-Jeanne:  unwind in nature; relax on the flow of the river; discover the history and architecture of the region.