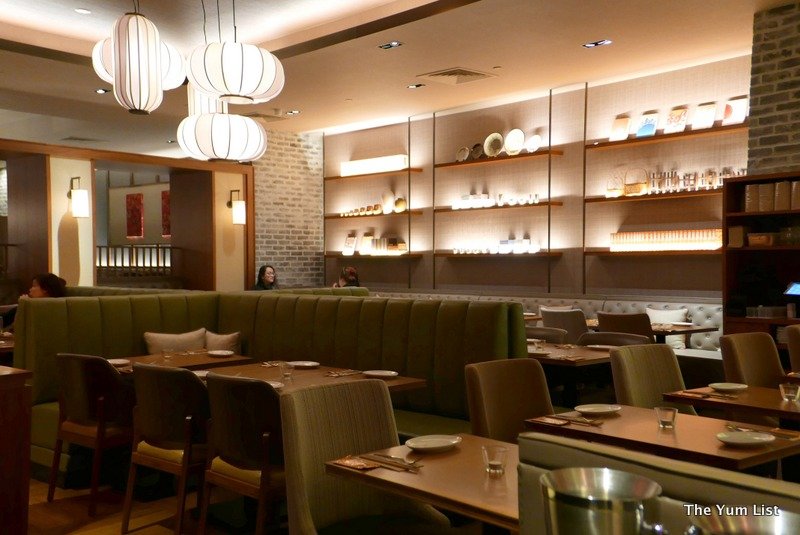 I love it when there is somewhere new in town. New as in just opened, like a week or two ago. Isetan, The Japan Store, is one such place, with their level five eateries offering visitors an opportunity to sample the full gambit of Japanese cuisine, from fusion-inspired through to Michelin Star.

Last week, we started our Japanese journey at The Tokyo Restaurant. Positioned as ‘entry level’ in terms of introducing popular Japanese flavours to the rest of the world, it is anything but. What it is, is an innovative, well-considered restaurant, which elevates the Japanese cuisine we know and love.

The Tokyo Restaurant is both a bar and a bistro. Nestled in one corner of level 5, The Tokyo Restaurant’s bar is what you notice first. Behind the bar are tables, and off to the side, an open hot kitchen, and further tables and booths. We opted for a booth seat, cosy enough for four, which overlooked the bar, the kitchen, and the shoppers meandering by.

The bar stocks the usual staple cocktails. But, a hidden card up their sleeve, is mixologist Shawn Chong, who is tasked with crafting a unique cocktail every month – one that reflects the classics, but pays homage to both Malaysian and Japanese influences. This month is the Pandan Slipper. Do not get discouraged by the slightly iridescent colour – that’s all part of the charm, designed to lure you in with curiosity. Pandan contributes to the colour, and helps to heighten the experience of the cocktail. Slightly fruity, a little sweet, and divine served cold – this drink sets the tone, and the mood for the evening – something familiar, but twists along the way, and definitely intriguing.

We enjoyed our experience family style – sharing the delights as they were placed before us. Although Japanese cuisine is geared more towards individual servings, I liked the option to share.

Salad was the first order of the day. Both their Oriental Chicken Salad, and their Quinoa Salad were delightful. The Oriental Chicken Salad was delicious – chicken (naturally), cucumber, vegetables, coriander, and crispy wonton skin. Add to that a mild ginger dressing for a sublime flavour balance. A single serving is certainly generous, and makes for a great couples entrée. The Quinoa Salad was also exceptionally good. Quinoa, red peppers, lettuce, mango, pear, avocado, carrot, seasoned with salt, white pepper, and cumin. Did I mention pear? The pear added both softness and texture to the salad, making each mouthful light to the palate.

A first for me however was the Foie Gras Sushi. A singular, delicate piece of sushi, served on especially-crafted pewter plates, combined the simplicity of sushi, with the rich, luxuriousness of foie gras. With a slightly deconstructed presentation, it is both visually appealing, and definitely divine. When you delicately take two or three bites, or you engulf it all at once, this sampling is one not to forget.

The Uni Mayo Lobster was another superb dish. Canadian Lobster, Sea Urchin, and Miso Paste form the base for this crustacean delight. Half a lobster, cooked perfectly, with unexpected flavours. This non-seafood guy was wanting more. The lobster had quite an intense flavour from the miso paste, but this added to the overall dish.

The Grilled Australian Wagyu was another pleasant surprise. Its wasabi soy sauce added depth to the beef – I love anything spicy, so this provided me with a new opportunity to explore Japanese spice (hot, but not too much). The beef was served sliced, with an appropriate pinkness to it (I still love my beef rare as rare can be, but others at the table like a little more heat), and accompanied by mashed potato and diced mushroom. The spicy beef, hot pepper, char grill ticked all the boxes for me.

The lobster paired nicely with the Wente Morning Frog Chardonnay (California) and the beef with the Printer Bridge Zinfandel from California. The Tokyo Restaurant have a small but impressive wine list, many wines not commonly seen elsewhere, so a great opportunity to sample something different. Personally, the Zinfandel did it for me – an accessible red, but not without complexity and flavour.

Although the Japanese aren’t known for their desserts, The Tokyo Restaurant had a real surprise up its sleeve – Sixth Avenue Cheese Cake. They say it’s the best cheesecake in Kuala Lumpur. We were skeptical, but had an open mind. Light, airy, fluffy, that fresh cream. Perhaps, they were right! I would go back just for the cheesecake alone – or even plan a meal around that. But, try for yourself. If you are a cheesecake lover, this must be on your bucket list.

To put the icing on the cake, so to speak, our host Yusuke generously opened some fantastic Japanese whisky. Over the past decade, Japanese whisky has been growing in popularity, and deservedly so. With two barely legal eighteen year olds, The Yamazaki and The Hakushu, followed by the Hibiki 17, these three drams ensures a brilliant conclusion to our The Tokyo Restaurant exploration. The Hibiki was superb – a whisky to savour – as was our introduction to Tokyo Restaurant. All round, a yums-up experience!

Reasons to visit: fabulous Japanese cuisine somewhat different to what is found elsewhere in the city; friendly sophisticated setting; don’t miss the cheesecake!