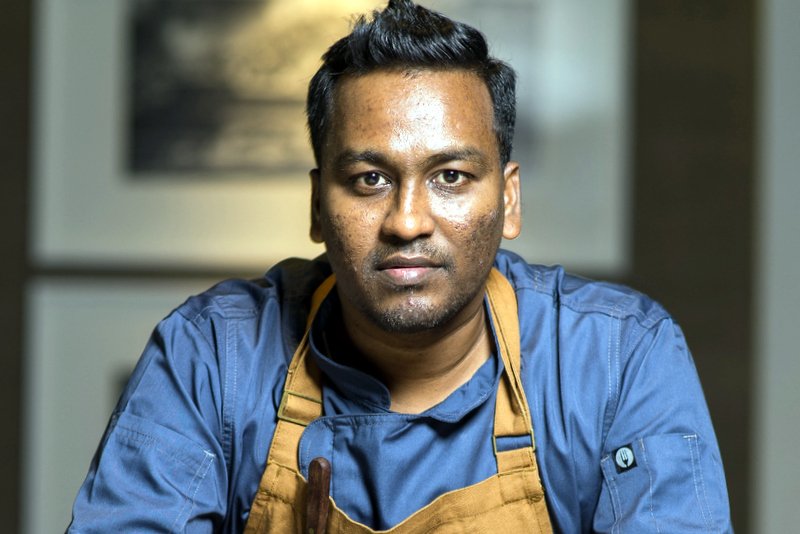 What do you do and how did you get into the industry?
I’m the head chef at Nadodi, Engaging Nomadic Cuisine. I’ve been in the hospitality and restaurant industry since 1998. It started as a passion to understand the science behind cooking and progressed to understanding ingredients, cultures and cuisines revolving around food.

Share with us an interesting story from behind the scenes.
Nineteen years ago my very first job was to remove the skin of chicken in a restaurant. I would be just doing that particular job for the major part of the day. As it was customary that the chicken used in majority of the Indian Cuisine were skinless, these skins were never used for any other purpose but just going to the garbage bins. I always wondered when I munch upon a fried chicken with skin or a roast chicken, the skin seemed to me the most acclaimed part, and chefs of all ages would love just hog on to anything crispy. I was still not convinced by just serving chicken skin by itself to anyone, but after coming to Malaysia I found out by interacting with so many locals that they loved the skin too. Yet the apprehension was always there. It was my chef de cuisine Sri Charan, who is a rebel who wanted to break the pattern and convinced me to serve the same. Here at Nadodi we have a recipe called “What Came First?” which pays homage to crispy chicken skin and egg mousse.

Another interesting story from behind the scenes..
It was a situation during my cruise days when I was the chef entremetier. There arose a situation that the person who was handling the night shifts at salad section had fallen sick and was unable to continue his duties. The head chef after understanding my CV, which spelt experience in the ladder section approached me to aide him on the production of the salad section. I carried on working for the whole day and finally when I clocked out it was almost 27 hours of work without any hiccups. I was rewarded by the head chef with a promotion on the hierarchy, this is when I learnt that hard work reaps dividends.

What’s the best/ worst part of your job?
The best part is being able to connect with various walks of life with ease, which also makes a person understand culture.
The worst part is putting on weight with all of the food tasting.

What’s your favourite meal/ drink in the Nadodi?
I can never select just one favourite meal or drink at Nadodi. Every dish in the menu has an inspiration and uniqueness. I’d say every single dish and drink is my favourite.

What’s one of the most inspirational things you’ve seen behind the scenes?
I’m always blown away by the commitment to attain perfection by chefs around the world.

The perfect day off would be…
By the pool with a BBQ, watching my kids play. Basically you could say that I live for the moment.

A day in the life of a chef is…
… is definitely not monotonous! The aura of discovering something new is always there being a chef.

What do you do for fun?
I’m a avid sports fan (cricket, F1 and soccer). I love to write and post stories on my blog about food.

What’s something you’d like guests to know about Nadodi?
Nadodi is about creating a niche of reinventing the recipes of nomadic influence with modern cooking, techniques and flair of three regions of southern India. It elevates the dining experience into a new level, that it has to experienced.

What makes Nadodi different from other Indian restaurants in Kuala Lumpur?
It is the first of its kind in the whole world, drawing inspirations from the nomads of southern India and recreating it.

What’s your view on the Indian food scene in Kuala Lumpur?
KL has a healthy food scene, the diversity in culture and appreciation for food from various parts of the globe is an added advantage. Banana Leaf restaurants are more in KL than in Chennai I would say, and the abundant supply of raw materials, which are distinct and unique on their own accords gives it the enhancing experience.

What’s in store for you in the upcoming months?
Nadodi is in its soft launch phase. Obviously the big day of opening our doors wider is next on the cards, and after which consistency and working on further surprises as our menus would go on for a period of just three months before changing.

Read about our 10 mile journey at Nadodi here.

I'm the editor of The Yum List®. I have a passion for food, travel and having fun. Together with my team of writers I hope to lead you to delicious and enjoyable experiences around the world.