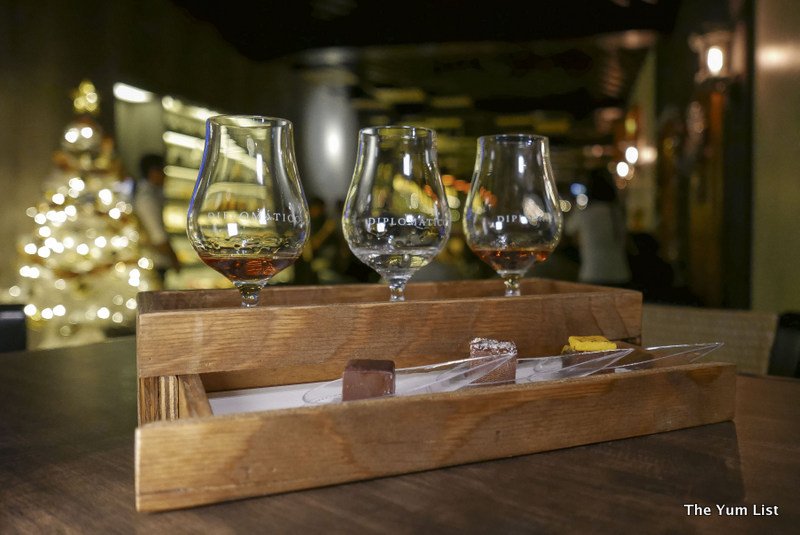 I am the first to admit that my knowledge of all things rum is significantly limited. As an Aussie girl from the country, my initiation to the world famous spirit was far from world class, and beyond Bundaberg and Bacardi, with maybe some Malibu and a mojito or ten thrown in, I have remained seriously ignorant to the variety and amazing quality of rum originating from exotic locations across the globe. When the invitation from Monica for the Diplomatico Rum and Chocolate Pairing at The Rum Bar KL arrived in my inbox, I realised that it was high time I learnt more about the spirit famous for keeping sailors hydrated. Some Venezuelan chocolate being involved at the same time may have helped me make that decision just a tiny bit faster…!!

The Rum Bar KL, in Changkat Bukit Bintang, has had its doors open for around six months, and in that time has already earned the reputation as KL’s primary establishment offering top class rum (many rare and unavailable anywhere else in Malaysia) and rum-based cocktails, as well as some seriously good food. It is owned and managed by the same group responsible for renowned KL establishments such as The Whisky Bar, The Steakhouse and Dining In The Dark. The bar itself is the centrepiece of the chic modern interior, with a wall lined with over 250 different rums from more than 20 countries providing a stunning backdrop, and setting the mood for tasting and learning more about the featured Diplomatico rums that will be starring in the show.

Diplomatico Rums originate from the Planas Valley, at the foothills of the Andes mountains in Venezuela, and are recognised as some of the finest rums in the world. Two ranges are produced by the distillery, and we were to be tasting the rums in the Diplomatico Tradition Range. The Tradition range is the result of unique rum making style that combines expert Hispanic, American and British traditional distillation methods to produce three distinctive and versatile rums that can either be sipped or mixed in elegant cocktails.

Not to be outdone by the rum on offer for the evening, the accompanying chocolate definitely held its own and was proudly provided by Ning, renowned chocolatier from Chocolate Concierge, Bangsar. Ning is passionate about providing only the very best, sustainably grown and produced chocolate from select areas across the world. His commitment to the environment and devotion to the chocolatier craft became abundantly clear once we had the pleasure of tasting the stunning Venezuelan chocolates he had specially designed to perfectly pair with each of the three Diplomatico rums.

After being seated, we were personally delivered a beautifully presented timber tray with three glasses of Diplomatico rum and three samples of chocolate. Each glass sat above tasting notes, as did the chocolate. The anticipation had definitely peaked and we were ready to start. The evening proved to be an education in the art of drinking rum, as well as how pairing the perfectly selected chocolate would only enhance the experience.

The first sample we were eagerly inspecting was the Diplomatic Mantuano (meaning ‘nobleman’), a dark golden liquid that looked like spiced honey nectar. Mantuano is blended from a combination of column, batch kettle and pot-still distillates that originate from sugar cane, molasses and honey. Balanced flavours of dried fruit, oak and vanilla were present, and the combination of the mango and passionfruit chocolate with the rum brought out even more of the fruit palate and gave a beautifully smooth finish. This chocolate with rum concept was off to a flying start!

Next, we were swirling a perfectly clear and colourless sample of the Diplomatico Planas rum. Again a blend from select pot still, column and batch kettle rums, this rum had been aged for up to six years and filtered using a complex charcoal filtration system that had given the rum its crystal clear appearance and smooth finish. There were fresh tropical aromas of coffee and coconut, and the chocolate chosen for this pairing brought more gorgeous coconut flavours in the most creamy, melt-in-your-mouth way. The addition of the chocolate definitely lifted the flavours of the rum to another level and made the finish silky smooth.

Finally, the last glass on the tray was next in line, and the Diplomatico Reserva Exclusiva proved to be a fitting finale to the tasting trio. This amber coloured rum is a sipping rum, carefully crafted from the purest of sugarcane honey, distilled in copper pots and aged in small oak casks for up to 12 years. It had notes of maple syrup, orange peel and brown sugar, with a hint of liquorice as well. This rum was the perfect accompaniment to the honey and caramel chocolate with a touch of sea salt, which again was divinely melty and never overpowering, a testament to Ning’s skills in using chocolate to enhance the characteristics of each rum we had tried during the evening.

After spending time listening to the experts talk with passion about each aspect of the evening, that being the Diplomatico rum, and the gorgeous chocolates, and learning how to drink these beautiful spirits and how to enhance the experience, I was definitely feeling a little more enlightened. The world of rum is certainly complex, and there is a fascinating story of history and culture behind each one, something that I learned during the course of the evening. I felt very lucky to have been able to taste the fabulous rums from the Diplomatico range, as well as to have learned more about Ning and his passion for ethically sourced cacao beans and the production of the finest quality locally produced chocolate using sustainably grown cacao beans from all over the world.

If you would also appreciate this tasting and learning journey, the Venezuelan Diplomatico Rum and Chocolate Pairing (RM88) is available throughout the month of December at The Rum Bar KL, Changkat, Bukit Bintang. It’s highly recommended, however, you need to make a reservation to avoid disappointment.

Reasons to visit: some of The Yum List’s favourite rum and chocolate together at the same time!