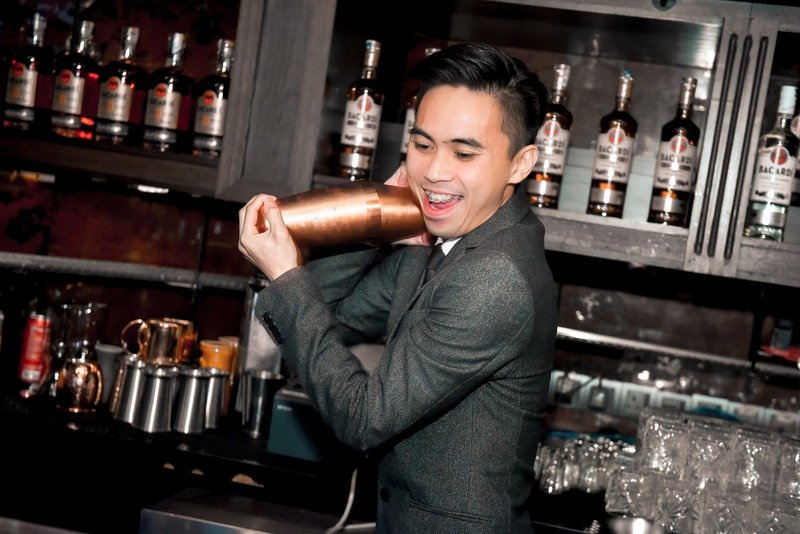 Affie Adut, Bartender at Coppersmith, Troika Sky Dining chats with The Yum List about his journey to become a bartender and some exciting things he’s mixing up for guests.

I always had a passion for performing arts and I love to put a smile on people’s face. Dancing, acting and singing allow me to express my creative side. My family owns an IT business firm in our hometown Sabah, Malaysia. Growing up, I always looked up to my brother Afriz Shazwi as a role model since my father passed away. My brother was a bartender for five years at Traders Hotel and won many cocktail competitions during his career.

My brother, however, made the decision to head back to Sabah to continue the family business. I was intrigued by the art of mixing as I always watched my brother and his housemates working behind the bar at Traders Hotel. I love their enthusiasm and flair behind the bar and how their guests are entertained and having a good time. It reminded me of a pop star rocking the stage!

I learnt a few tricks from them while I was at the bar. There I met Mr Khadafei, the restaurant manager of Fuego and Coppersmith at Troika Sky Dining who convinced me to try out the food and beverage scene at one of the hottest dining places in Kuala Lumpur.

I started being a waiter at Fuego and at the same time, I kept a close eye learning tips and tricks from the bartenders. Shortly after that, I gathered my courage to officially try out bartending and I’m at the highlight of my career as I’m currently representing Malaysia in Bacardi Legacy cocktail competition Southeast Asia finals in Singapore this month!

Bacardi is a family-owned business that was founded in 1862 and is now one of the largest privately held, spirit companies worldwide known for their white rum. Brothers Facundo and Josè set up their first distillery in Santiago de Cuba in the rafters of the building lived by fruit bats which inspired the brand’s bat logo. According to their traditional beliefs, the bat logo represents brotherhood.

One day, I stumbled on an opportunity to participate in the Bacardi Legacy cocktail competition in 2018. I was inspired by their story, created a cocktail named ‘Siblings’ and submitted it for the competition.

Siblings is made out of the three core Asian essentials; pandan, ginger and calamansi. These ingredients are mixed with Bacardi Carta Blanca to create my winning legacy cocktail. I could not contain my excitement and am still in disbelief that I was chosen to represent my country with my legacy cocktail for the Southeast Asia finals.

I am so thankful to my bar manager and mentor, Mr Rick Joore that once told me “a good drink does not make you a bartender; creativity, passion and a little luck does.” Anyone could make a good drink based on recipes but it is their creativity and passion in a person that would build their career. I would say I am lucky with the positive influence and guidance from the team at Troika Sky Dining especially Christian Bauer and Eddie Chew for providing constant support that allowed me to grow my passion as a bartender. The bar is my stage as I put on a show mixing and creating drinks for my audience who are the guests.

I love being the host and to entertain guests whether they are happy, sad or sober. I get to play the role of a comedian or a storyteller and I love to listen to different stories, experience and meet people from different walks of life. That would be the best thing about being a bartender.

After winning the chance represent Malaysia in the upcoming competition, I had to grow my legacy drink as the new global classic cocktail. I am doing guest shifts at the local bars in the city and other countries as well. In addition to that, I did an online poll for my research that allows me to create samples for bars internationally to feature my legacy cocktail on their menus.

My knowledge in graphic design, hobby in photography and videography came to be an advantage as I needed to promote my legacy cocktail with flyers, bottle labelling and stickers. I am hoping that those who enjoyed my drink could spread the news to their friends.