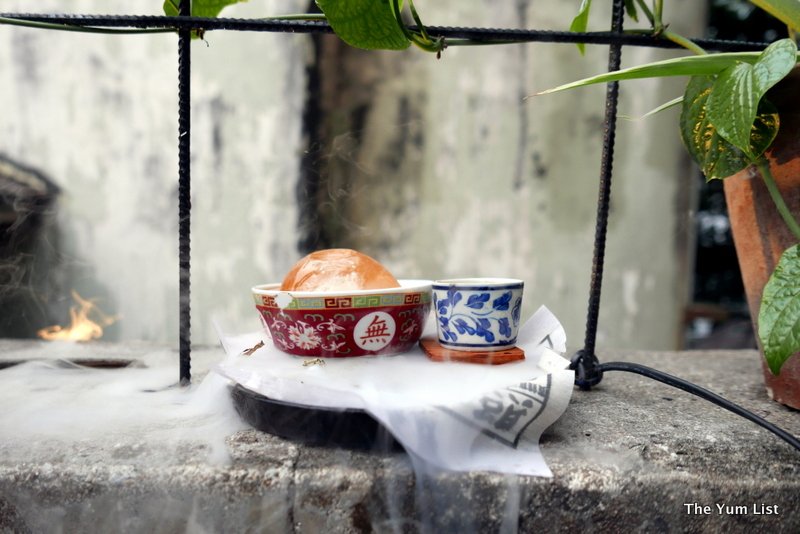 Dancing with the Dead – A Date with The Deceased

And then you hear it. Just as you’re about to reach the intersection where Hang Jebat greets the Sultan. It’s coming from beyond that door on your left. You try to ignore it. Shake it off. Attribute it to something else even. The dying drone of a streetlamp. The distant echo of a speeding motorcycle. You’re tired, you tell yourself. Exhaustion brings mischief to the mind. But no matter how hard you try, no matter how often you convince yourself that what you’ve heard was a whisper of the wind, you can’t shake off the feeling that the noise, the voice, that sorrowful sound… was that of a woman’s. A wail. A moan. But why? Where? From beyond the door. How? Your mind’s becoming frantic. Her voice being the only thing you can hear now, freezing you in your tracks.

The door opens… revealing a narrow stairwell. You’re walking towards it now, against the advice of every single nerve in your body, screaming you should bolt in the other direction. Her voice is louder here. Clearer. Deafening. Mournful. And you see them. The bloodstains on the walls, the hell notes littering the floor, and the eerie glow from above, behind another door. You’ve come this far, you can’t stop now. Your right palm is already on the door, at the top, as your mind decides…

It’s time to visit The Deceased.

Which really isn’t such a horrifying place after all. Hell, even that severed hand on the wooden block (probably freshly chopped off too) looks perfectly at ease next to a crimson-coloured thirst quencher. We’re pretty certain it isn’t haemoglobin swirling in that glass, though who could confirm if not the bartender? But that’s really the appeal here at The Deceased, the new kid on the block who’s fast gaining notoriety and infamy for its macabre setting and ghastly cocktails. Conceived to spook and entertain, the bar is Jack Torrance crazy over the presentation of their bewilderingly breathtaking drinks. Literally. One sip of their reasonably priced concoctions (about RM35 per cocktail) and you may be breathing your last as you take one step closer to meet your maker.

We begin with the aforementioned crimson concoction, I Know What You Did Last Summer, which is a sweet and refreshing combination of vodka, gin, and blackcurrant juice. You don’t need to be a fan of horror to recognise its namesake, and the drink does come with a surprise, of which we shan’t reveal in this review lest it diminishes the impact. With its combination of ingredients, the cocktail is basically Ribena for adults: at once intoxicating and nostalgic.

Next up, we have the Tea of Oblivion. If you’re familiar with Chinese folklore and mythology, you’d recognise this as the “drink to forget your past lives”, which, in a modern context, could be reinterpreted as the drink to forget your Friday night mistake. While it doesn’t come with the friendly old lady (“Meng Po” if you’re interested in looking her up) whose one job is to obliterate the memories of all before they play reincarnation roulette and be reborn as either a pig or a baby, the Tea of Oblivion does arrive in full, foggy splendor, so get your cameras ready for that ethereal shot. It’s the most fragrant cocktail of the lot, many thanks to the gin that hits the olfactory like sweet perfume, and it also has a pleasantly treacly entry that I associate with tuak, which is an ingredient used in the drink.

By now, it’s obvious that the team behind The Deceased is having a fun time naming their drinks as much as they are designing them, as evident in the next cocktail, Petty Person Beating. This, to me, has the funniest presentation, especially if you’re accustomed to the Cantonese tradition of smacking “villains”, because it comes complete with an incense stick, joss paper, a paper cutout of the person you presumably despise, and a wooden clog. An actual wooden clog, right next to your cocktail, that you’re free to use if you know the ritual. The drink itself is easy to swallow, with a heavy citrus base and the oolong infused gin giving it a really nice balance; but ultimately, it is the entire set up that steals the show.

The following two cocktails, The Medium and the Emperor Punch, are both refreshing options on the menu. The former has Barbie’s upper half jammed onto a crystal ball (which is actually a really pretty spherical glass), hence its name; while the latter breaks tradition with its unusually simple presentation, though it does arrive at the table within an “imperial mug”. At the time of writing, these two are subtler in profile compared to the other available concoctions, and I love that hit of winter melon on my tongue when I’m slurping The Medium. The pairing of gin and ginger ale in the Emperor Punch, on the other hand, excites the tongue and you could easily have two of this in one go.

Like the Emperor Punch, the Cream Caramel Sour is a little vanilla when it comes to presentation, but boy, does this have a killer bouquet that would put Poison Ivy’s sweet-smelling toxins to shame. The layer of meringue floating above the rum can be torched if you like things a little smokey, but I love the caramel-y palate the original provides, which tantalises like a pleasant dream before the nightmares that await you…

Case in point: Marvel over this gruesome arrangement you see here with The Offering. That bloated ice hand looks like something the police scooped up from the bottom of a frigid lake where a serial killer disposed the dismembered body parts of his unfortunate victim. It’s… beautiful, in a nightmare-inducing way. Interestingly, The Offering is The Deceased’s interpretation of a classic Negroni, so no surprise when we say this is the strongest contender when it comes to making your complexion glow as red as the blood dripping off the hand.

Finally, there’s The Ouija. A massive and impressive display boasted the spirit whom we communicated with while playing the board. You only drink from the top glass above, which has been sealed with tinfoil and sprinkled with lime powder. The idea is to drink this as you would down a shot of tequila, though the experience is far more pleasant since the gin-based cocktail has blue pea and elderflower swimming in its mixture. Once it is safe for us to remove our fingers from the saucer, we relish in this sweet ending.

Our only qualm with the bar is that they don’t reference great movies like Beetlejuice, or Little Shop of Horrors, or even The Rocky Horror Picture Show, especially since the aesthetics shared between the movies and the bar are very similar. Then again, we do wonder how that last one would be implemented and introduced… At the end of the day, it is the team behind The Deceased that makes the bar, with their effervescent personality and, well, earnest attempts at providing a good scare, which usually ends up in wholesome laughter. Just like the end of a good horror flick, as the credits roll and you replay the scenes in your head, you leave the theatre of The Deceased wanting more.

Reasons to visit: the unabashedly kitschy and entertaining atmosphere that pulses within the walls of The Deceased; it’s the only place so far that dares to defy the conventional bar set-up, replacing it with a garishly macabre theme; the photogenic drinks, which are really worth the visit considering the amount of thought and effort that goes into their design and presentation.

The Deceased
(located right next to Mingle and Leaf & Co; ask for the passcode from them – or get the passcode by making a reservation)
55 Jalan Sultan
Chinatown KL
50000 Kuala Lumpur
Malaysia
www.facebook.com/thedeceasedkl
+6 018 200 0262