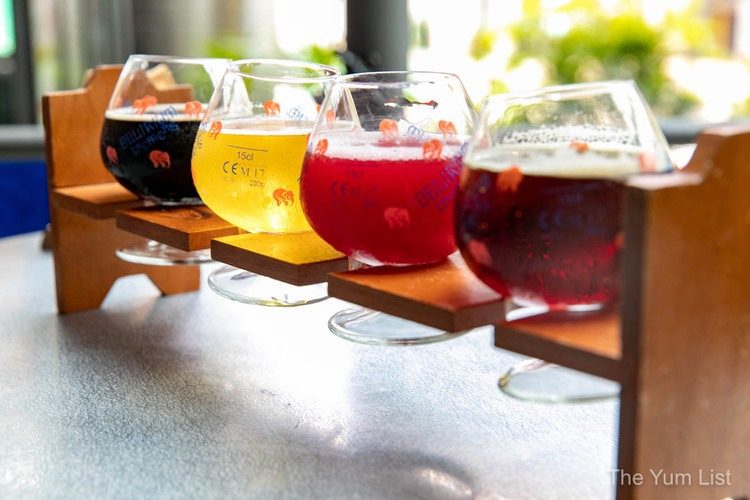 As a beer lover living in Malaysia, it can sometimes be tough to stay inspired. Beer choices are often limited and expensive while the most delicious options I’ve found are often brewed in colleagues’ spare bathrooms.

Stepping out of those cosy ceramic confines, and into Delirium Café’s bright, open space overlooking the fountains at Suria KLCC was a very welcome change of scenery on a recent Sunday afternoon of beer sampling. (No offence to my beer baron friends!).

Greeted by the welcoming smile of owner Andrew Wong and Delirium’s passionate, knowledgeable manager William (not to mention an inviting row of taps), I knew we were in for a proper Belgian beer journey.

“Our goal is to transport people someplace else,” said William, as we glanced over the encyclopaedic listing of available brews. “The pink elephant (Delirium’s global mascot) is synonymous around the world for serving great beer and we want to bring that special experience to KL.”

With 12 seasonally selected suds on tap and over 117 speciality bottled beverages available, I was ready for the experience – and slightly worried that I might be seeing pink elephants by the day’s end.

While we didn’t sample every beer (I did my best), we started with the lighter beers on tap and moved our way up to the heavy hitters. Lead by our trusty guide William, I have to say we set an incredible pace.

First up was the Biolegere (3.5%/330ml/RM31), which is an organic, refreshing ale with citrusy notes and a lot of balance. Being a lighter beer, the Belgians drink this one after a hard day’s work, but I would drink it on an easy day too.

In the same vein, the Floris Witt (4.5%/250ml/RM29), is a smooth drinking, summery wheat beer with a slightly bitter finish and a fantastic choice on a hot afternoon.

Moving quickly to the Floris Kriek (3.6%/250ml/RM37), a sweet cherry-infused, wheat beer with a sourish balance, this one tasted like a refreshing fizzy juice. This one was Caning’s favourite.

The Campus Premium (5%/250ml/RM23) is Delirium’s second most popular beer, which is quite hoppy, but not overpowering. It’s another nice hot weather drink with a golden firm head and a malted nose.

Next up was the Barbar Blond (8%/330ml/RM35), (perhaps my favourite) a honey-scented ale with spicy citrus notes and a hint of cloves. For the price, taste and alcohol content, I think this one offers the best bang for your buck and your buzz.

The most popular and famous beer was served up sixth. The Delirium Tremens (8.5%/330ml/RM37), is an award-winning golden ale with a strong, easy finish and where the restaurant’s name and pink elephant came from. Drinking so much of the tasty ale one evening, the creator of the beer unexpectedly contracted tremors and saw pink elephants everywhere – and the rest is history.

Thankfully tremor-free, we next sampled a couple of red beers. The Petrus Aged Red (8.5%/330ml/RM35), a full-bodied cherry aged ale that’s fruity and sour, and the Delirium Red (8%/330ml/RM37), which is a very thick and sweet cherry beer with a compact head and sweet/sour balance.

Finishing strong, we enjoyed the Delirium Nocturnum (8.5%/330ml/RM37), a heavy, dark ale with a malty, chestnut character and Monk’s Stout (5.2%/330ml/RM37), a chocolate-espresso-martini-facsimile complete with dry bitter notes and tastes of roasted nuts.

With the taps dry, we also had the pleasure of enjoying two of Delirium Cafe’s most special bottled beers.

The Deus (11.5%/750ml/RM329) is a sparkling beer (my first ever) that messed with my mind when I tasted it. Is it champagne? Is it beer? It has how much alcohol in it? The answers really don’t matter. It’s simply a fantastic beer and Mon clearly held a special fondness for this one.

We also sampled a Trappist ale, which are limited edition brews created by monks across Belgium and regarded as some of the best ales in the world. In fact, Belgians line up for hours just to get a taste. We were treated to Orval (6.2%/330ml/RM59), which is a very dry beer that’s hoppy and malty and tasty. So good – and so cool that I had the chance to drink a rare European beer in tropical KL.

Halfway through the beers, we decided it was time to mix in some food. And Delirium Café’s grub is definitely not an afterthought: it is solid, thoughtful and delicious.

The Creamy Chicken Pesto Pasta (RM37), made with spaghetti and creamy roasted garlic pesto, grilled lime chicken and crunchy beans, and the Seabass Meuniere (RM45) served with lemon butter sauce and ratatouille over basmati rice, are two satisfying dishes that go well with all sorts of beer.

My favourite, the Heart Attack Burger (RM75), is a 200-gram beef patty served on a bagel bun with four different kinds of cheese, fried egg and onion fries. I figure if I’m going to be drinking beer, I might as well be all-in on caloric intake. No regrets.

Our final mains were a soft and juicy oven-roasted Rack of Lamb (RM83) prepared with asparagus, rosemary potato and pomegranate salad and the Mussels (500g/RM139) cooked in a choice of gravy and served with traditional imported Belgian fries. We selected the tomato basil gravy, which was made with tomato broth, basil, peppers, olives and Parmesan cheese. I could have eaten the sauce all by itself it was so good.

For dessert, we enjoyed a selection of Belgian fries – Traditional (RM13), Potato Noisette (RM13) and Truffles Croquette (RM23) served with four dips – black pepper, herb and cream, Roquefort and mayo. All were crunchy on the outside and mashed potato-y on the inside. Imported straight from Belgium, the fries are a true delight.

With the beers and food gone, it was time for a nap to ward off any possible dancing elephants or tremors. All in all, a successful, delirious journey.

Reasons to visit Delirium Café KL: An amazing selection of Belgian craft beers with knowledgeable and passionate staff to help with your journey. Tasty food and a fun atmosphere make it a great place to gather with friends – day or night.

Delirium Café Opening Hours:
Delirium KL is open from 11 am until 1 am on the weekend and until midnight weekdays. Happy hour is Monday to Friday from 4 to 8 pm with special prices on the tapped beers when you order three or more.