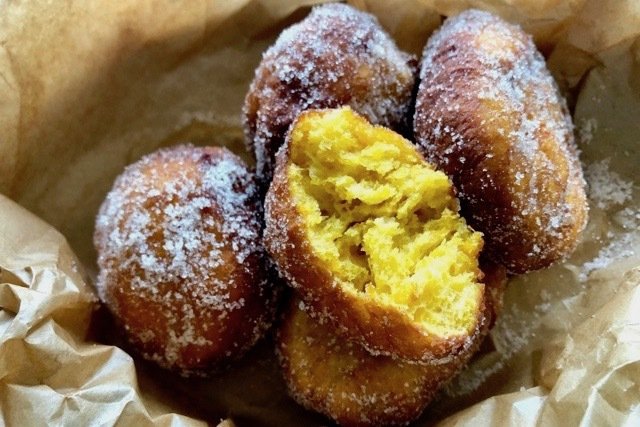 With time on your hands, you can make this slightly more evolved doughnut, the pumpkin beignet. The French make them smaller, using a faintly different technique, and call it beignet. This recipe is based on the Portuguese fried pumpkin dough, Sonhos de Abóbora or ‘pumpkin dream’, featured in one of my pumpkin-themed Saturday cooking classes. The beignet can also be flavoured with some rum or brandy. To do this substitute half of the orange juice with the liquor. The roasting step gives a better pumpkin flavour. The game-changer is the salted chocolate ganache you drizzle over the pumpkin dreams.

To Prepare Pumpkin Beignets
Preheat oven to 180°C. Bring a pot of salted water to boil. Peel the pumpkin and remove seeds; cut into chunks. Boil pumpkin for 4 minutes on medium heat. Strain pumpkin and place on a greased ovenproof dish. Roast for about 20 minutes or until pumpkin is soft. Set aside to cool completely, about 1-2 hours, or overnight in the fridge.

Combine the flour, yeast, sugar, salt and zest in an electric mixer fitted with the hook (dough) attachment. Mix on medium speed for 30 seconds. Add in the rest of the ingredients, except dusting sugar and cinnamon, and knead until well combined, about 3 minutes. Remove dough and shape into a ball. Set aside, cover and leave to prove for about 2 hours or until doubled in volume. Divide dough and form walnut-sized balls, or you can just pinch the dough into freeform nuggets.

To cook, heat a pot of oil (3cm) on medium heat. When hot, carefully lower dough into the oil, a few at a time, making sure they observe some social distance! Fry until golden brown in colour, turning once. Remove fried doughs to drain on paper towels. While warm, roll the fritters in the mixture of sugar and cinnamon powder.

To Prepare Ganache
Combine chocolates and fleur de sel in a mixing bowl. Combine water, cream and milk in a saucepan and bring to a simmer. Pour hot mixture onto the chocolate, stir with a spatula until well combined and serve warm as a dipping sauce for the beignet.

Find more recipes by KL chefs, such as this one for Pumpkin Beignets, here. And, stay up to date with what’s happening on the KL food and beverage scene here.