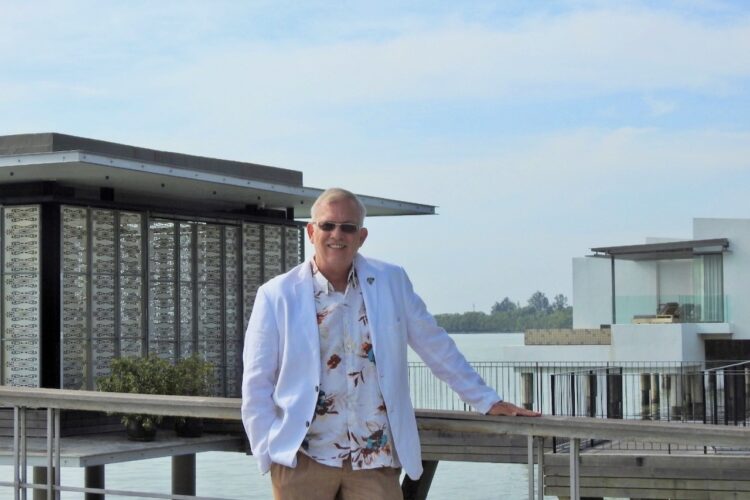 James Francis Mc Manaman, general manager of Cove 55 resort in Kuching, Sarawak, shares some anecdotes and wisdom from behind the scenes.

What do you do?

I run an amazing boutique resort in the foothills of Mount Santubong in Sarawak, Malaysia, on the Island of Borneo. I am grateful to be leading a talented team who exceeds guest expectations and create memories that last a lifetime.

How did you get into the industry?

I grew up in Scottsdale, Arizona, where there are some amazing resorts. Hospitality was a natural fit for my personality. I joined the longest-running five-star and five-diamond Arizona Biltmore to launch my career and climb the ladder to Conference Services Manager.

Share with us a story from behind the scenes.

Once I was the resort liaison for Sir Elton John while Director of Guest Services at the Fairmont Scottsdale Princess Resort. His personal Valet arrived a few days before to “set up” Elton’s clothing and accessories. We had one guest room for his sunglasses, another just for shoes, and still two more for outfits. These were not “Show Costumes” but his personal attire. He was with us for a full month while touring the Southwest, and he was an absolute gentleman. He gives all of his liaisons a nickname based on a famous celebrity and your middle name. Mine was “Arlene” after the iconic movie star Arlene Francis.

What’s a food memory from your childhood or travels that stands out?

I absolutely love local markets in SE Asia – trying the food from the area, meeting the people, and experiencing the creativity and diversity that is out there if you put yourself in front of it! My favourite memory was at a local Thai restaurant on the Chao Praya river. We had an American visitor and really went to town on ordering things that sounded interesting. Fried Fish Air Bags (Lungs, we think) was the hit of the day – tasty and interesting!

The best part is that feeling when you know your team has “wowed” a guest. Seeing the team feel the pride of doing their best for the guest.

The worst was seeing all the hardship that the Corona virus caused for so many. The silver lining is that, while I personally had to lay off 70 staff on Koh Samui, Thailand, many of them turned to their entrepreneurial side and opened their own businesses. Some launched coffee shops and others began baking and selling everything from fried rice to banana muffins!

That is an easy one! Roasted lamb chops, along with a peppery South African Shiraz.

What’s one of the most amazing things you’ve seen behind the scenes?

As the Director of Special Events at the Fairmont Scottsdale Princess, I ran the Phoenix Open Men’s Golf Tournament for eight consecutive years. The tournament ran for one week, and we welcomed 700k spectators every year. Our team of over 200 staff had an amazing time being out on the greens and nailing the execution of the event. A million moving parts, all working together – just amazing!

One year we developed a thing we called Code 86 – this meant that the key leadership were to “meet at the Garcia’s tent stat” ( a Mexican food vendor) – for one cold Margarita – we worked long hours, and this was our rejuvenation meeting!

A day of exploring with my partner – wherever we are. Finding a new restaurant or an art gallery, getting off the beaten path and doing something unexpected.

A day in the life of a resort General Manager is…

As a resort GM, the day starts with morning rounds of the property. Seeing guests at breakfast and connecting with them. Greeting all members of staff from the front desk to the dishwasher.

There is always a morning briefing where the team strategizes the operation for the day, highlighting special guests or situations which may be out of the normal. Truly there is no real “normal” in hospitality, and that’s why I love it. Of course, there are emails and meetings and projects that take up a good portion of the day too.

What does James Francis Mc Manaman do for fun?

Host a dinner party – or a game night – think Balderdash, charades, a murder mystery, or a plain old game of cards. One of my longest-running game nights (once a week for three years) was playing a German board game called “Settlers of Catan.” We even wore bowling shirts and gave out little stars for our lapels when someone won the night’s round!

What’s something you’d like guests to know about Cove 55?

I joined Cove 55 just as the resort was putting the final touches on 12 new luxury villas. Adding to the existing 15 resort rooms, these new villas, and the addition of several other amenities on the property have truly transformed Cove 55. The most amazing part is the setting, positioned at the base of Mount Santubong. The surrounding area is not only beautiful but peaceful and quiet. Our guests just can’t help slowing down to take it all in.

How has the pandemic changed you, your perspective, or the way you operate?

Like almost everyone I know, re-building staffing levels at hotels is done in a new way. Cross-training the team to support each other is more important than ever before. Staff have the opportunity to learn new skills, and the productivity of the operation is enhanced enormously.

What’s something you’d like people to know about being a general manager as a profession?

As a GM in Hospitality with about 40 years of experience in six countries, I have learned that while many people and places are unique, there is one common thing that exists in the people that choose this business – attitude. I hire attitude over experience in every situation. Anyone can learn a new skill if they have the right attitude. I have learned that surrounding yourself with positive, enthusiastic people while running a hotel makes it a joy for them, for the guests and for you!

What’s your view on the hospitality scene in Kuching?

I am a newbie here in Kuching, Malaysia (on the Island of Borneo). As a hospitality guy, I look forward to meeting many people who may just be coming back or moving here under the “Make Malaysia your Second Home” program. As the borders continue to re-open, I also look forward to getting involved by volunteering with the local community. I have served on several non-profit community organizations in the past, and I look forward to doing the same here.

What practices do you currently implement or hope to implement in the future to work towards social responsibility and sustainability?

At Cove 55, we are preparing to eliminate all single-use plastic, which means drinking water bottles and other things that can be replaced with a recyclable product. We have other plans in the works around sustainability and preserving our amazing nature here in Santubong. One idea I am working on is supporting a hornbill or orangutan rescue operation – or both!

My next few months will be spent fine-tuning our new operations and setting new standard operating procedures. It is all about the details!

I also look forward to my partner arriving from Thailand and setting up our new home in the charming city of Kuching. So much to explore too on this amazing island of Borneo.

Read more interviews such as this one with James Francis Mc Manaman here, and stay up to date with the latest food and beverage happenings in KL here.