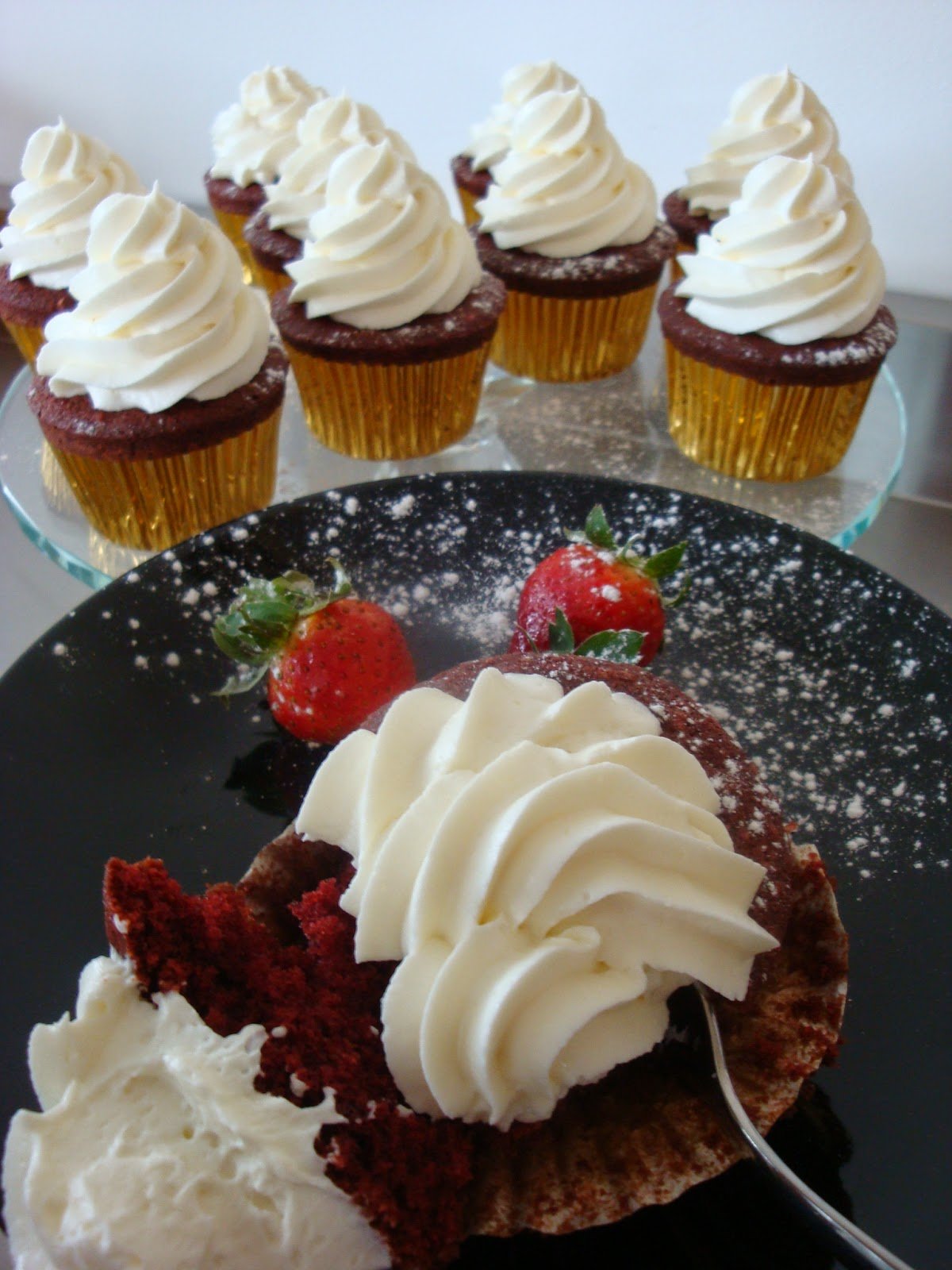 Daahlings,
Hope
this Sunday finds you fabulous as always!
This
week I thought I would share my Red Velvet Cake recipe with you. I have made cupcakes but you can as easily make a cake with the same recipe.
Below is what Wikipedia, the free encyclopedia, has to say about Red Velvet Cake:
Red
velvet cake is a cake with either a dark red, bright red or red-brown color. It
is traditionally prepared as a layer cake topped with cream cheese or cooked
roux icing. The reddish color is often enhanced by adding beetroot or red food
coloring. Before more alkaline “Dutch processed” cocoa was widely
available, the red color would have been more pronounced. Common
ingredients include buttermilk, butter, cocoa, and flour for the cake, beetroot
or red food coloring for the hue.

James
Beard’s 1972 reference, American Cookery, describes three red velvet cakes
varying in the amounts of shortening and butter. All used red food coloring,
but the reaction of acidic vinegar and buttermilk tends to better reveal the
red anthocyanin in cocoa and keeps the cake moist, light and fluffy. This
natural tinting may have been the source for the name “red velvet” as
well as “Devil’s Food” and similar names for chocolate cakes.

When
foods were rationed during World War II, bakers used boiled beet juices to
enhance the color of their cakes. Beets are found in some red velvet cake
recipes, where they also serve to retain moisture. Adams Extract, a Texas
company, is credited for bringing the red velvet cake to kitchens across
America during the time of the Great Depression by being one of the first to
sell red food coloring and other flavor extracts with the use of point-of-sale
posters and tear-off recipe cards. The cake and its original recipe are well
known in the United States from New York City’s famous Waldorf-Astoria Hotel.
However, it is widely considered a Southern recipe. Traditionally, the cake is
iced with a French-style butter roux icing (also called ermine icing), which is
very light and fluffy but time-consuming to prepare. Cream cheese frosting and
buttercream frosting are variations which have increased in popularity.

In
Canada, the cake was a well-known dessert in the restaurants and bakeries of
the Eaton’s department store chain in the 1940s and 1950s. Promoted as an
exclusive Eaton’s recipe, with employees who knew the recipe sworn to silence,
many mistakenly believed the cake to be the invention of the department store
matriarch, Lady Eaton.

In
recent years, red velvet cake and red velvet cupcakes have become increasingly
popular in the US and many European countries. Resurgence in the popularity of
this cake is attributed by some to the 1989 film Steel Magnolias which included
a red velvet groom’s cake made in the shape of an armadillo.  Magnolia Bakery in Manhattan, having served it
since its opening in 1996, certainly helped to popularize it, as did
restaurants known for their Southern cooking like Amy Ruth’s in Harlem, which
opened in 1998. Cake Man Raven opened one of the first bakeries devoted to the
cake, in Brooklyn, in 2000.

Ingredients:
250 g cake flour
Pinch salt
15 g cocoa powder
115 g butter
300g white sugar
2 eggs
1 tsp vanilla extract
240 ml butter milk
25 g red
food colouring
1 tsp vinegar
1 tsp baking soda
Method:
1.
In a mixing bowl
sift together the flour, salt and cocoa powder. Set aside.
2.
In another
mixing bowl, beat the butter until soft.
3.
Add the sugar
and beat until light and fluffy.
4.
Add the eggs,
one at a time, beating well after each addition.
5.
Add the vanilla
extract and beat until combined.
6.
In a measuring
cup, whisk the buttermilk with the red food colouring.
7.    With the mixer
on low speed, alternately add the flour mixture and cream to the butter mixture,
ending with flour.
8.
In a small cup,
combine vinegar and baking soda and quickly fold into the cake batter.
9.
Pipe the cup
cake mixture into the cases or moulds.
10.   Bake at 175 C for about 45 minutes.
11.   Remove from the oven and place onto a cooling rack. Leave to cool.
Cream Cheese Frosting

225 g cream cheese
225 g mascarpone
1 tsp vanilla
60 g icing sugar
360 g  whipped cream
Method:
1. Beat the cream cheese and
mascarpone until smooth.
2. Add the vanilla and icing sugar and beat again until smooth.
3. Using a whisk, fold in the cream and whip
until the frosting is thick enough to pipe.
4. Pipe the frosting onto the cupcakes and enjoy!!
Happy Baking!
Chef Peter